If there’s one thing we enjoy doing, it’s going to the theatre and seeing a Christmas Show. Anyone who has ever read the Julia Donaldson classic story – Stick Man will know that whilst this tale can be enjoyed at any time of the year, it does have an especially festive ending. Over the weekend we went along to The Lowry Theatre in Salford Quays to watch the Scamps Theatre group perform Stick Man. 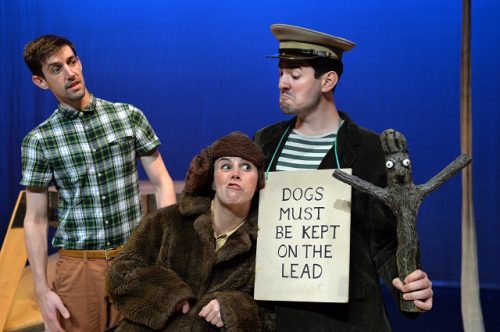 Stick Man is a modern classic and is suitable for children aged 3+ and is on at The Lowry from 1st December to 6th January. Fans of the book will enjoy this delightful adaptation where Stick Man finds himself in all kinds of perilous situations. The world outside the family tree is a dangerous place for Stick Man. A dog wants to play fetch with him, a swan builds a nest with him and he even ends up on a fire! But will he ever make it back to the family tree?

The show opens with some rousing singing and some giggles from the small cast which leads into the hilarious and heartwarming tale of the adventures of the Stick Man. Mathew Hamper excels as the Stick Man, he really brings the stick to life and his face is so expressive. His side-kick and lady-love played by Lara Cowin plays a diverse range of characters, from a girl, to a swan and a dog.

The dog was my son’s favourite. Robert Wade is essential and absolutely hilarious as the percussionist/musician/set of other characters. I was a little bit transfixed by all of the instruments and other noise making toys Robert had on his table, he adeptly sound-tracked the whole thing and it was a joy to watch. 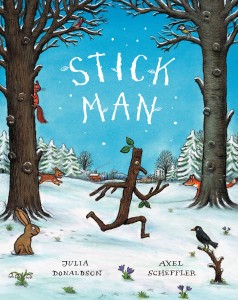 The stage is simply set out, with a table which doubles up as the family tree and all kinds of other things too. There is a table to one side covered in Robert’s noise making things. In terms of props, umbrellas and inflatables feature quite heavily.

There’s some audience participation to keep you on your toes, some obligatory “he’s behind you!” shouting and a festive snow shower at the end.

It’s a simple production, but one which has a lot of pace. Like the story, there’s a lot of scenes to get through and before you know it, the hour is up and it’s time to head home.

Stick Man is a lovely show. Both me and my son were chuckling away throughout and spent the tram journey home chatting about our favourite and most funny bits. It’s a lively, live-wire show which kids and adults will love in equal measure.

For more information and to buy tickets, visit the website.

Check out our run down of family theatre shows in the region this Christmas.

Note: We were invited to review Stick Man. All opinions are our own.