Dragons are one of our favourite mythical beasts. Some are scary, some are friendly, some are just plain misunderstood. From George and the Dragon to Norbert the Norwegian Ridgeback from Harry Potter, dragons have long been a feature in songs, stories and fairy tales. A few weeks ago we made our own egg box dragon, and it’s had us reading more about dragons at bedtime.

We’ve picked out five brilliant books about dragons which we enjoy and you might too. 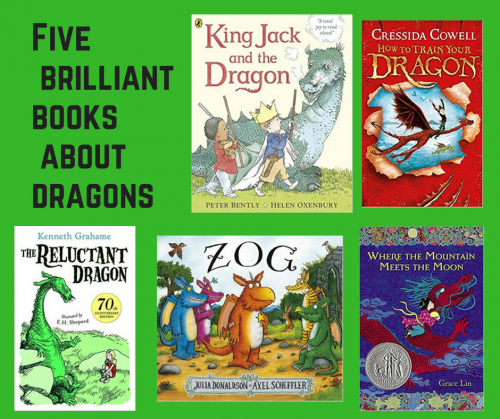 Zog by Julia Donaldson, illustrated by Axel Scheffler is the story of Zog, the keenest dragon in school. He’s also the most accident-prone. Thankfully, a mysterious little girl always comes by and patches up his bumps and bruises and helps him along the way. But will she be able to help him with his toughest test yet – capturing a real princess?

Where the Mountain Meets the Moon by Grace Lin is a book for slightly older primary aged children. It’s the story of a young girl named Minli who lives in a ramshackle hut with her parents. Her father tells her the story of the Jade Dragon and the Old Man in the Moon. Inspired by these stories, Minli spends one of her precious copper pennies on a beautiful goldfish, which brings about a change in the fortune of the owner. Minli is eventually joined by a dragon who can’t fly; together they set out to find the Old Man of the Moon to ask him to fulfill their dreams. It’s a wonderful story for 9-12 year olds.

The Reluctant Dragon by Kenneth Grahame is the classic retelling of the St George and the Dragon story from the author of The Wind in the Willows, Kenneth Grahame. Everyone knows St George has to do battle with the dragon, but what happens when the dragon simply doesn’t want to fight St George? A lovely story for dragon fans aged 8 and over.

There are dragon stories for all ages here and lots to spark little imaginations. Who is your favourite dragon? Have I missed any seriously special dragon stories? 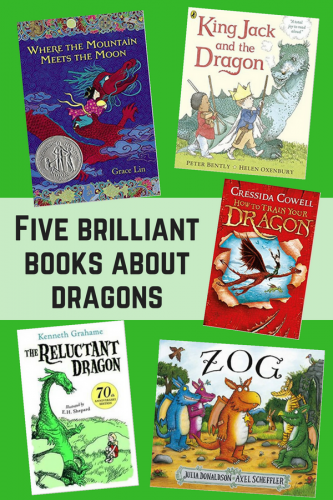 This entry was posted in Books and tagged books about dragons, How to train your dragon, Julia Donaldson, King Jack and the Dragon, The reluctant dragon, Where the Mountain Meets the Moon, Zog. Bookmark the permalink.