The world is 4.54 billion years old so I’m pretty sure there isn’t an original idea out there. I hold my hands up, I went on ye olde Pinterest and borrowed/was inspired by/stole this idea for kids handprints on canvas. They were for Christmas presents, I thought they’d be cute, cheap and easy to do. Two out of three ain’t bad.

To start with I went to one of those pound shop type places and found some cheap canvases. I bought a pack of four for a pound, which was an immense bargain.

When we got home I painted wavy scenes on them, thus accurately depicting the ocean. I would’ve asked my four your old to help but I didn’t want blue paint everywhere, it was quicker and it was easier for me to do it than to stand in the kitchen for an hour arguing why the sea couldn’t be red. My wavy canvases looked like this… 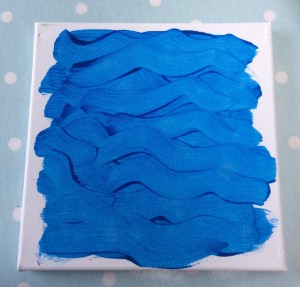 They took a while to dry, so I left them overnight. Naively I thought getting the boy to press a painted hand onto a canvas would be the easiest thing in the world. I was wrong. I started this crafting venture on 2nd October 2014 and we managed to finish it on Christmas Eve.

Both husbear and I tried repeatedly to get him to do it, we tried it with our best “fun activity” voices, we negotiated hard, we tried bribery, we tried tricking him into doing it, we tried witchcraft (made that one up). Nothing on earth could persuade him to put paint on his hand and press it onto something four times. But for some reason, late on Christmas Eve afternoon he did it. Using some sparkly gold paint thickly slicked onto his hand, he made a fish swim in the sea. We did a victory dance. We ran up the stairs and did that thing Rocky does, I did a lap of honour round the kitchen. Then we had a brew.

Once they’d dried (at this late stage I helped them along with the hairdryer) I got a marker and drew on an eye and a mouth for the fish, wrote his name on his masterpiece (his masterpiece? Yeh right) and then wrapped them up for gifts. 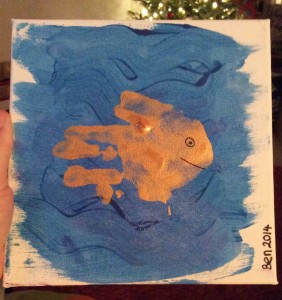 I think it looks alright, it’s a nice thing to have and any self respecting grandparent would love to receive some artwork from one of their beloved grandchildren wouldn’t they? Wouldn’t they? Apparently not. Three months of negotiation and temper tantrums (from both sides) and not a glimmer of appreciation for it. Next year they’re all getting a box of crappy chocolates instead.

This is a cheap and easy activity for you to do with a willing, co-operative child. I wish you luck with your crafting endeavours, but I fear our crafts-as-gifts days are over.

25 thoughts on “Crafting with Kids: Fish handprints on canvas”