Two of the world’s greatest storytellers – Roald Dahl and Steven Spielberg – unite this year to bring Dahl’s classic to life. Based on the beloved novel by the iconic British children’s novelist, The BFG tells the exciting tale of a young girl named Sophie and the mysterious Big Friendly Giant who introduces her to the wonders and perils of Giant Country. Steven Spielberg’s The BFG is released this month – making the DVD or Blu-ray the perfect Christmas present for young and old Dahl fans alike!

The BFG follows a young girl named Sophie who lives in an orphanage in London. One night, Sophie sees a large, cloaked person in her bedroom window who takes her away to his homeland in Giant Country. There, he identifies himself as the Big Friendly Giant (‘BFG’). Considered an outcast by his fellow children-eating giants, the BFG spends his nights sweeping the streets of London blowing bottled dreams into children’s bedrooms and sustaining himself on a diet of ‘snozzcumbers’ – a foul tasting vegetable substitute to ‘human beans’.

Despite his intimidating appearance, Sophie discovers that the BFG is a kind-hearted soul and they quickly become friends. The BFG shares with Sophie the wonders and secrets of Dream Country, but she soon finds herself in danger by the sudden arrival of several human bean gobbling giants. In order to stop the Giants tyranny, together they prepare a plan to appeal to the Queen of England for help. 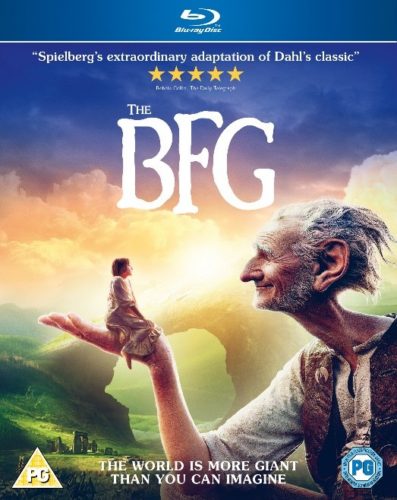 Directed by three-time Academy Award winning director, Steven Spielberg (E.T. the Extra-Terrestrial, Jurassic Park), The BFG stars Oscar-winning actor, Mark Rylance as the BFG (Bridge of Spies, The Other Boleyn Girl) and newcomer Ruby Barnhill as Sophie. Penelope Wilton plays The Queen, Rebecca Hall as Mary, the Queen’s maid, and Rafe Spall as her honourable servant. They are joined by Jemaine Clement and Bill Hader as two of the formidable giants.

THE BFG is available on Digital Download, Blu-Ray™ and DVD. Order your own copy today on Amazon.