Now I’m self-employed, I am officially a part-time member of the ladies who lunch brigade. When I was offered afternoon tea for two at Opus One at the Radisson Blu in Manchester, I decided it was high time I treated one of my fellow self-employed types to high tea. So last Wednesday myself and the exquisitely monikered Bobble Bardsley put on real clothes, turned Homes Under the Hammer off and went out for a posh tea at Opus One. 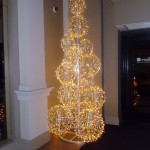 I’d been there before and had a lovely time, so I knew we were in for a treat. We arrived and were informed they were expecting a drinks party so we’d not be able to sit in the lovely, light and airy space by the window and we were seated in the main restaurant. We thought it’d be a great place for a romantic meal in the evening, but the red lighting was a bit much for daytime, and meant that we couldn’t really see what we were eating. Also, I love Bobble with all of my heart, just not in that way.

There were a few afternoon teas we could choose from but we decided that since it was December it’d be rude not to try the Festive Afternoon Tea. Bobble plumped for a pot of English Breakfast tea and I gave the Ceylon a go. Both were a good brew. 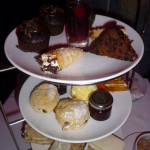 The afternoon tea arrived and as I’m vegetarian, they’d made a few extra veggie sandwiches for me. I’ll admit in the light it was hard to tell what they were, but we both liked the cheese and pickle and I enjoyed the cream cheese and cucumber. We were both half starved so the sandwiches disappeared in double quick time.

I’d been eyeing up the scones, I love scones, these were prettily presented and the proper, thick, crusty clotted cream had a shard of caramel stuck out of it. The scones were sadly cold, but that could’ve been our fault for faffing about taking pictures. They were however light and beautifully made, just the right size and for me and they are always the highlight of an afternoon tea. If you can’t give me a decent scone then I’m going home.

By this point I was beginning to feel grateful I’d popped an elasticated waist on that morning and Bobble was proudly telling me he was wearing his more forgiving fat jeans. But we still had the grand finale to munch through. We got fresh pots of steaming hot tea and soldiered on.

First up were the mini cream horns. I felt it prudent to start with these because they looked delicious and we needed to get them out of the way because Bobble kept giggling. I’m not overly keen on pastry and I like it wafer thin if I ever do have it, so this was for me a little on the thick side, but (bowing to knowledge passed on to me by Grandma who was a pastry chef) it was perfectly crisp and flaky. It was a good cream horn.

We then tried the fruit cake, which was moist and an excellent example of what a top notch fruit cake should be and it was packed with fruit. We both felt that it could’ve done with a bit of marzipan to make it feel more festive, but it was actually one of my highlights from the tea. 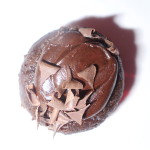 I was most excited to try the mini chocolate fudge cake which looked beautiful but for some reason photographed terribly. Take my word for it, this was the good stuff. The cake was moist, light and fluffy with a gooey-gooey centre that oozed out. It was plate-lickingly good. I might have rubbed a finger across the plate to ensure no crumbs were left, I might not have, I am a lady after all.

We finished off with the winter berry jelly, sadly we were only issued with one jelly, which we assumed was an oversight as other tables were given one each. So we had to share the little jelly, which felt a bit intimate. It’s been a long time since I shared a jelly with anyone other than my husband. I loved the jelly, full of lovely fresh berries and it was such a zesty, palate cleansing end to the tea.

In all we’d had a lovely time, we’d eaten some really tasty things, drank some very good tea, put the world to rights and taken a selection of shockingly bad pictures of food. I think it’s the ideal resting point after a hard morning of Christmas shopping and before getting the tram home. The staff are friendly and attentive and the atmosphere, despite the lighting is relaxed and intimate. It’s decently priced too at £18.95 per person.

Disclaimer: We were invited as guests of the restaurant and were not asked to pay for our food or drink. We did love it though and will be back for more!