Why is winning so important? Over the past few months I’ve noticed a creeping change in my six year old son. He seems increasingly competitive and talks more and more about winners and losers. Neither me or his dad are particularly competitive, nor are we especially prone to winning things. We’ve rationalised our collective failure to win gold, silver or bronze in anything by making sure whatever potentially competitive activity we are taking part in, that we mostly do it for fun or for the simple joy of taking part. So where has this obsession with winning come from?

Driving down the motorway and Ben is cheering for his dad like he’s Lightening McQueen in a big race, instead of a man taking his family on holiday. At our first Dog Show yesterday there were fat tears of disappointment when our dog didn’t win a rosette in a category. I spent much of my afternoon explaining over and over that it was just for fun, that just because the judge doesn’t think Penny is the scruffiest dog there, doesn’t mean she’s no good, because she will always be a winner to us.

Life seems to be constantly divided into winners and losers. It’s so black and white with him it’s disheartening. We’ve never really let him win games just because of his age, life is filled with minor wins and losses, and games are a good way to experience a minor win or a small loss in a reasonably controlled way. We played Snakes & Ladders in the pub on Sunday, having to explain over and over that it’s a game of luck and not skill was tiresome. Having to tell him over and over that luck will see him climb a ladder as much as luck would see him slither down a snake. More tears of outrage and injustice at the thought of losing, which eventually dried when luck made him the winner of the game.

I do things because I like doing them, not because I necessarily want to be the best at them. My husband runs, not because he’s fitter, stronger or faster than anyone else running alongside him, but because he likes it. Maybe our attitude speaks volumes about our lives. Maybe we’re just too content with who we are and what we do to be competitive. I don’t feel like I’ve got anything to prove to anyone but myself and my boys.

Winning is important in life, I’m not going to argue against that. But life is always a mixture of win some, lose some and we’re trying to raise him to understand that. A child who strives only to win but doesn’t appreciate or enjoy the game is never going to be truly fulfilled, and since there can usually only be one winner, that child is likely to be disappointed at some stage.

I’ve always felt that comparing myself against other people will almost always lead to disappointment. I try to only be competitive with myself. Can I do better? How can I do better? What target shall I set myself this month?

It’s hard to strike the balance when you’re raising kids. I want to teach him to try his best and strive to be the best he can be, but also that disappointment is part of life. When you fail to do as well as you’d hoped, it’s a great opportunity to think about what you did wrong and what you can do better next time, and that taking part and having fun is just as valuable as winning a medal.

Teaching kids to not take losing so hard and so personally is difficult. I’ve always been honest and straight with him, so when he hears me give him a rational and reasoned explanation why our dog did not win the scruffiest dog category, he understands and accepts that.

Competitiveness is probably a natural part of growing up. You can only raise your kids to be the best that they can be and to give them the skills to deal with the disappointments that life will throw at them at some point. If you can manage that, you’re totally winning at parenting! 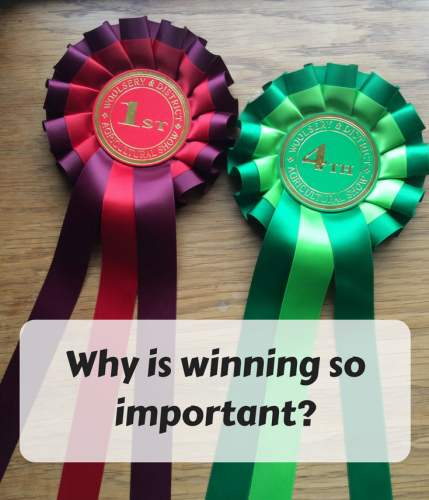 3 thoughts on “Competitive kids: Why is winning so important?”