For his birthday every year I bake my son a birthday cake. Each year he presents me with a set of grand plans for the cake, and each year I tone down his idea a little to something I can manage with my limited skills. Over the years I’ve learned how to bake pretty darn good cakes, but decorating them is where I fall down. I don’t like to disappoint, so when he asked for a Pokemon birthday cake, then rattled off an extensive list of characters I decided it would be best to make a simple Pokeball design with a colourful rainbow sponge inside.

It’s actually very simple and you don’t need loads of cake decorating skills to do it. If you can roll out icing and cut shapes out with a knife, you’ve got all the skills you need. 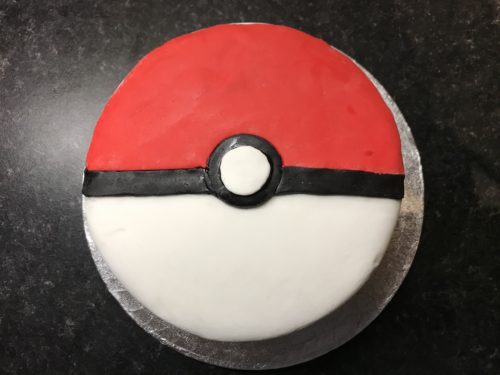 The finish of my cake was not perfect, but I had already spent a lot of time faffing about with the rainbow layers, and no one cared really. He was thrilled with his birthday cake, which is all that matters, that and piles of birthday presents.

To begin with I baked the rainbow layers. I made up a double batch of my victoria sponge recipe and using a set of scales divided it into equal portions. I then mixed through a few drops of the colouring from this set of 8 food paste colours. When you do this remember that the colour darkens in the oven, so mix it a shade or two lighter than you’d like. Once baked, leave them until they’re completely cool before assembling the cake.

To stack the cake, using a palette knife put a dab of the buttercream in the centre of the cake board. If you’re using rainbow cake, decide which order your rainbow layers will go and place the bottom layer on top of the blob of buttercream. This will help to anchor your cake in place and stop it sliding about. 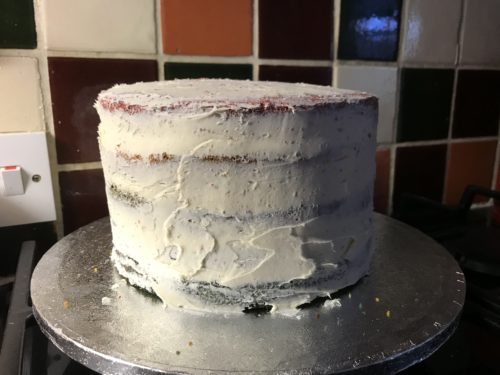 Spread a layer of buttercream on top of your first layer and top it with your next cake, cover that with buttercream and continue until all the layers are stacked.

Now it’s time to apply the crumb coat, which just means cover the whole of the cake in a thin layer of buttercream. This is so the cake crumbs stay where they should be and it will also help stick the marzipan to the cake. Once you’ve done this, put the cake to one side, somewhere cool. 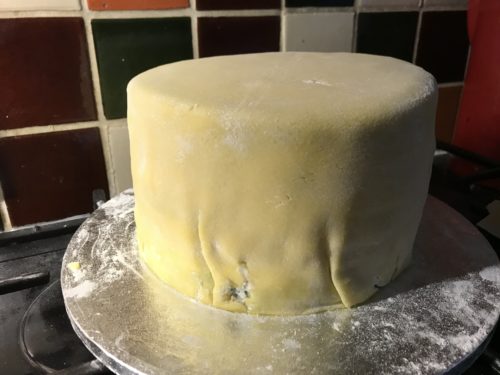 Now it’s time to roll the marzipan out. I used icing sugar to stop it sticking to my work surface and rolling pin. Roll it out as thin as you please. My marzipan was pretty thin, but not so thin it could easily tear; perhaps about the thickness of a pound coin. You’ll need to roll out quite a big piece of marzipan to cover the cake in one go, and it might be worth measuring how much area you need to cover with a piece of string.

Lift the marzipan with the rolling pin and drape it over the cake. Use your hands to smooth it down and all over the cake. You may need to trim some of the folds back so the finish is smoother. It doesn’t matter how this layer looks because it will be covered with the royal icing, but it does need to be pretty smooth and even all over. Take your time doing this. 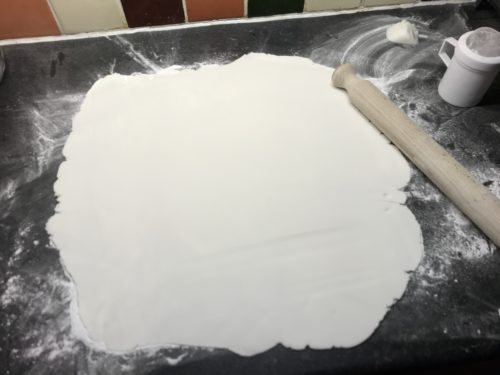 Now for the hardest bit. Take your white royal icing and put some to one side for later. Then roll out the rest of the icing, again using icing sugar to stop it sticking to the work top. When you’ve rolled out a piece as big as you need, brush the marzipan all over with water and carefully lift the icing onto the cake. Take as long as you need to gently smooth the icing over the cake. I find the warmth of my hands helps to smooth it out. This layer needs to be super smooth, so take your time to get it right.

After that you probably need to sit down with a cup of tea for a bit, so do that before you do the next bit. 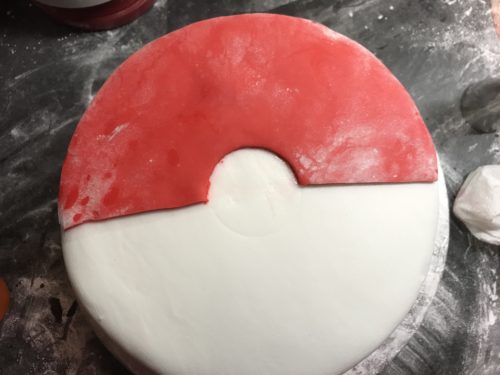 Now it the time to turn your plain white cake into a Pokeball. Just like before, roll out the red royal icing. Take one of your cake tins and use it to trace a semi circle the size of the cake. I then used a shot glass (don’t judge me) to cut out a small semi circle on the straight edge of the icing. Brush half of the top of your cake with a little bit of water, not too much as your colours may start to run and gently press on the red semi circle of icing.

Roll out the black icing and cut out a black circle the size of a shot glass. Using a knife cut out a circle so you have a black ring. Then cut out a long strip of the black icing the diameter of the cake. Have a look at the picture below and using a dab of water fix the icing where it should be.

Finally cut out a circle of white royal icing to sit in the black ring. Stick it in place with a dab of water and your Pokeball birthday cake is done.

It’s a really straightforward design and frankly if I can do it, I’m sure you can too! 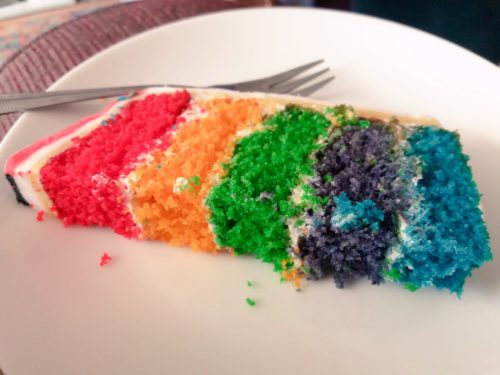 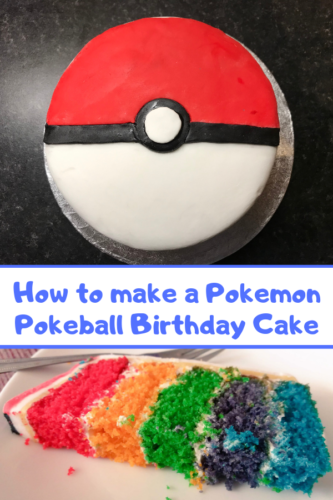 Like Loading...
This entry was posted in Recipe and tagged Birthday cake, pokeball, Pokemon. Bookmark the permalink.