I only make this jam once a year, it’s really easy to throw together and I use frozen blueberries which make everything a little bit more economical. My recipe makes a big jar of jam, but I have to hide it because if I don’t it mysteriously disappears before Pancake Day. The Fridge Blueberry Jam is to my mind at least, the perfect accompaniment to pancakes. My favourite thing is to make American style blueberry pancakes and then spoon this runny, oozing jam over the top. Sometimes I might have some cream, sometimes I might have some syrup. Sometimes the blueberry jam is enough!

Method
In a large pan ( a preserving one if you have one, don’t worry if not) over a medium heat; tip in all of your ingredients and stir until the sugar melts. Feel free to bash some of the blueberries about a bit with the back of a wooden spoon; this will help them release some juice.

Bring the blueberries up to a low rolling boil. It’s better to take this slow and steady than rush it and push it too far. At this stage put one or two clean jars in a low oven to sterilise them.

Keep an eye on your blueberry jam, keep stirring and after a while you should feel it start to thicken. Scoop any foamy scum off the top (this is just impurities from the fruit and the sugar, it’s not harmful at all) and discard.

Take a cold plate (if you put it in the fridge to chill, that’ll help) and put a dribble of the blueberry jam on. Leave it to cool and if it sets to the consistency you want, then your fridge jam is ready to be put in the jars. If not, keep stirring and testing the jam regularly. When it’s ready, carefully remove your jars from the oven (they will be incredibly hot) and pour in your blueberry jam. We use a wide necked funnel for this, but filling a jug and pouring it into the jar works just as well. Work quickly and carefully and get the lids on your jars while everything is still hot.

Leave your jam to cool and them pop it in the fridge for when you need it. I’d take it out of the fridge an hour before you need it if you can. It just takes the chill off it.

Enjoy spooned over pancakes, or it’s excellent on crumpets! 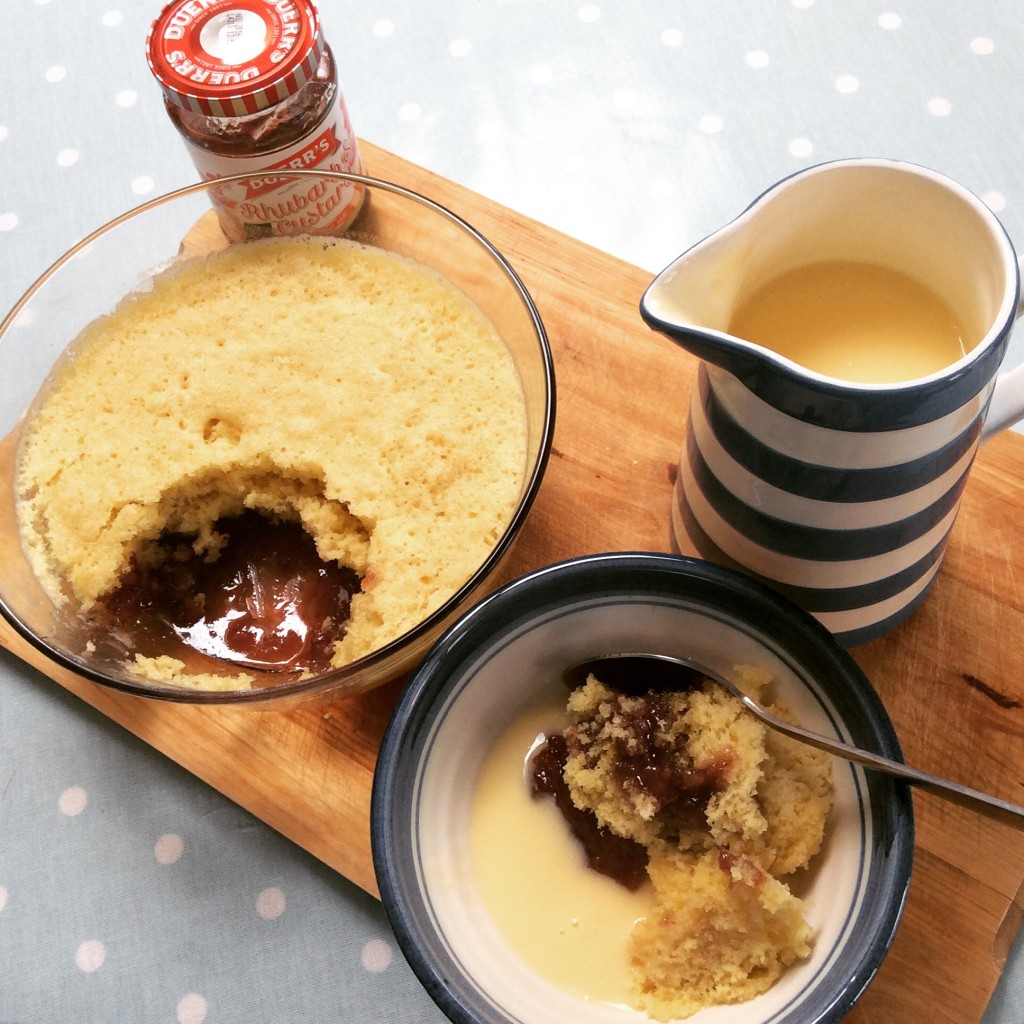 My microwave is 850 watts, yours may be different, so it might be best, at least the first time you make this, to reduce the cooking time, check it, and then check it ever minute until it’s cooked to your satisfaction. I originally guessed at 4 minutes, but my 850 watt microwave took 6 minutes to get to sponge perfection.