A few weeks ago I made a batch (well, several batches) of rocky road with Butterfinger Mini Cups. They were a huge success and I’ve had almost daily requests for me to make some more. It’s a simple recipe and one which can be thrown together quickly, so I thought I’d make a batch of KitKat Rocky Road with the bag of KitKat bites I had in the cupboard for snack emergencies.

KitKats are really underrated. They’ve been a favourite of mine since I was a child, though I don’t eat them quite as often these days. KitKats have reinvented themselves in a hundred different ways, but you can’t beat the two finger classic  can you? I do like these new(ish) KitKat Bites. It’s hard to put them down after the recommended snack sized portion though. 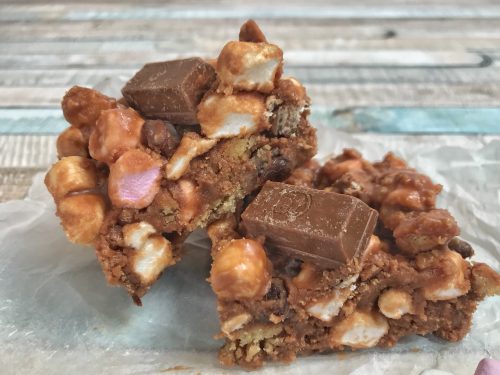 This KitKat Rocky Road recipe is probably the most popular rocky road I’ve made. All the ingredients are the kind of things that most people will have lurking in their cupboards, so it’s a great little store-cupboard recipe for emergency sweet treats! This recipe makes 12 generous slices. 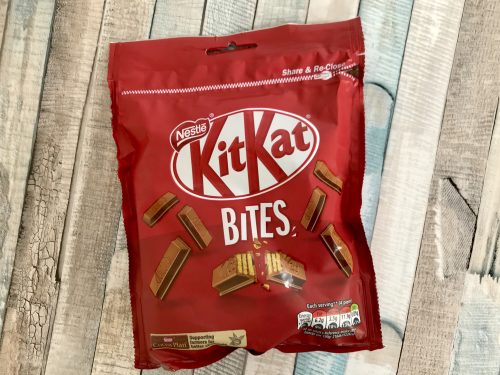 Method:
Line a high sided baking tray with baking parchment. I used a small roasting tin because it was about the right size.

Put the milk chocolate, golden syrup and butter in a glass bowl. Using a bain marie (put an inch or two of hot water in the pan and place the glass bowl over the top making sure the water doesn’t touch the bowl) over a gentle heat. Stir the chocolate until it has all melted together and it looks so good you want to put your face in it.

While the chocolate mixture is slowly melting, put the biscuits into a plastic bag and bash them with a rolling pin until they’re broken up, but not crumbs. Ideally you want a mixture of chunky pieces and smaller, crumbly bits. Once bashed, tip them into a mixing bowl. Add the marshmallows and raisins.

Take the KitKat Bites and put a few to one side for decoration. Take the rest and chop them into chunks, add them to the biscuit mix. If you’re using a full sized KitKat fingers, chop each finger into chunks and add those.

Once the chocolate has melted, take it off the heat and carefully tip the biscuity mix into the chocolate. Stir it well and make sure everything is coated. Then tip it onto your baking tray spread the mixture out. It needs to be about 2cm deep as a minimum for maximum awesomeness. 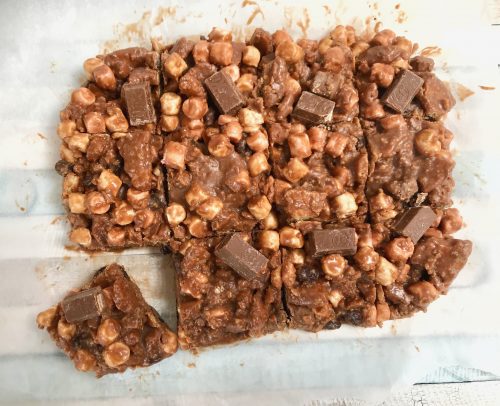 Take the KitKat pieces you’d put to one side and poke them into the mixture so they’re visible, but the melted chocolate will anchor them in place. Put the tray in the fridge or somewhere cool for at least two hours, better still overnight. Once set, cut into generous wedges and enjoy.

These KitKat rocky road treats will keep in an airtight tin for a few days, but I doubt they’ll last that long. 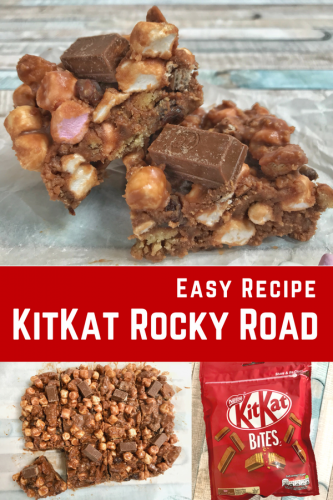