We were sent a selection of Violife vegan cheese to try, so we made these vegan cheese and baked bean pasties. All images and opinions are our own.

At some point in my late 30’s I started to develop what turned out to be lactose intolerance. As a cheese lover, this was something of a blow to me. I’ve been a vegetarian for 32 years now, and I find myself more and more cutting out dairy from my diet. I can take tablets to help me digest non-vegan cheese, but it’s just nice to be able to sit down and enjoy a meal that I know won’t make me poorly. Vegan cheese has come a long way since I first tried it several years ago, and Violife seem to be leading the way in making a range of vegan cheese products for all kinds of different vegan recipes.

I was chatting to a girl I work with who is vegan, and she recommended the epic extra mature cheddar as being the best vegan cheese she’d tried. So following her recommendation, I made a batch of vegan cheese and baked bean pasties for my hungry family. They are ridiculously easy to make, you don’t need any extra special culinary skills and they are so good, my 11 year old was scrabbling for more! 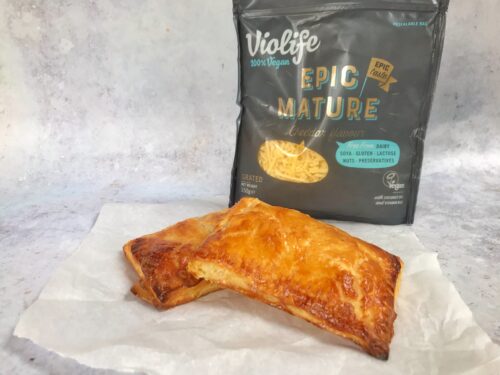 This recipe makes four pasties, to make more, just double it, or triple it. It’s so simple to throw together and they make a lovely warming lunch, or pre-swimming snack in our case.

How to make your Vegan Cheese and Baked Bean Pasties:

Pre-heat your oven to 200°. Unroll your sheet of ready made puff pastry and cut into four rectangles – have a look at the picture below which shows you the process. 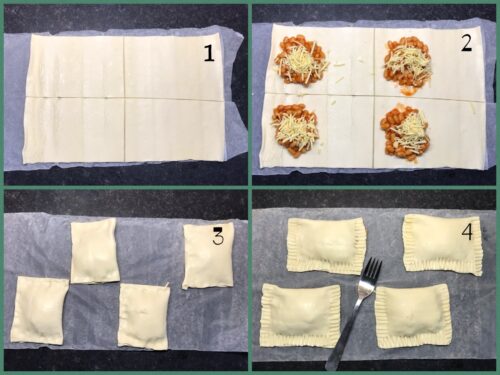 Open your tin of beans and tip them into a sieve to drain off some of the excess bean juice. Some brands are juicer than others, ideally you don’t want to add too much juice to your pasty as that will encourage them to leak out. Once they’ve drained off a bit, add about a tablespoon of beans to one side of the pastry and top with a large pinch of grated cheese.

Fold the pastry over and press the edges together. Using a fork, press the fork around the edges to seal them together. Arrange your pasties on a baking tray so they’re not touching and then brush with your preferred vegan “egg wash”. I used melted vegan spread and I was rather generous with it. 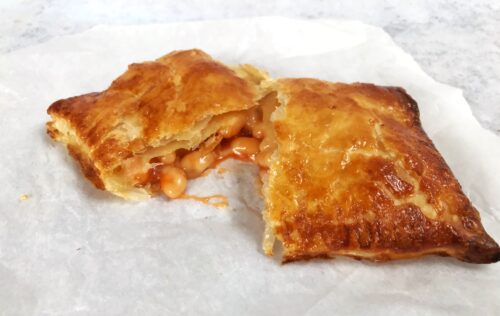 Bake in your pre-heated oven for 15-20 minutes, until they are golden and gorgeous. Take them out of the oven and leave them to cool for a few minutes. Do not be tempted to dive right in as the filling will be as hot as molten lava! 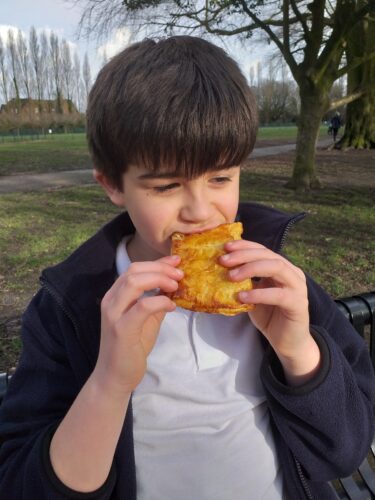 Once they’ve cooled off a little, eat them however you like. We ate ours on a park bench after school on our way to swimming, and very excellent they were too! 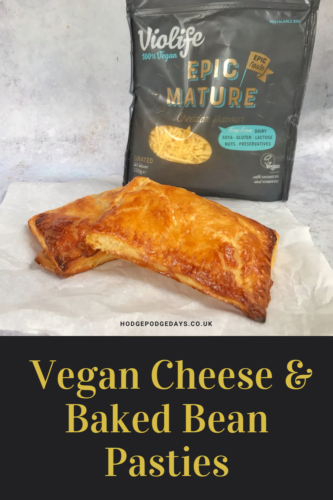