One of our favourite takeaways is curry. The small boy really enjoys a chicken korma and I like a saag paneer. A takeaway curry for the three of us is about £25 and that’s a big chunk of money out of our weekly budget. We just can’t afford to spend that on one meal at home, so when we were asked to try the new Patak’s frozen curries we thought it’d be an interesting alternative. 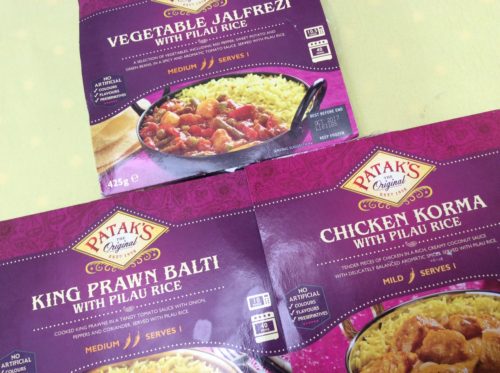 We tried the chicken korma, king prawn balti and the vegetable jalfrezi. These are priced at £2 each and they are currently only available at Tesco.

The ready meals weigh 425g and consist of a portion of curry and a portion of rice. The Patak’s frozen curries can be pinged in the microwave or cooked in the oven, they are meant to be cooked from frozen.

In terms of calories ready meal curries are probably a bit healthier than takeaway curries. The chicken korma contained 604 calories, the king prawn balti contained 478 calories and the vegetable jalfrezi 501 calories. We bought some naan bread to have with ours to make it feel more like a takeaway treat.

The small boy had his usual chicken korma. It looked and smelt good and there were good chunks of chicken breast in the curry. He didn’t complain that it was different to what he normally had, and he presented me with a clean plate at the end. The chicken korma was a success.

Hubs went for the king prawn balti. The sauce was flavoursome and complemented the sweet prawns well. He did say that it wasn’t as hot and spicy as he thought it should be. It was a medium strength curry, but he said it was quite mild. There were a good number of prawns in the curry as well as some small pieces of vegetables. I think £2 for a prawn curry is great value.

I had the vegetable jalfrezi. I thought the portion size was good, I struggled to completely finish my meal which is always a sign of a hearty portion. Again mine was a medium curry and I braced myself for a hit of spice, but found none. It was probably the mildest jalfrezi I’ve ever had. Which may disappoint some, but I was fine with that level. The vegetable jalfrezi had lots of interesting veg including sweet potato, green beans and peppers. I would probably prefer chunkier pieces of vegetables but other than that I enjoyed it.

I often find that homemade or ready meal curries, though usually nice, they’re not quite the same as a takeaway curry. I thought these were really good value, at £2 each, especially compared to what we would pay at our favourite takeaway and with the chicken korma a roaring success we’d be happy to try the rest of the range to find our favourites.

Patak’s Frozen Curries are available from Tesco’s at £2 each.

We were sent our curries for review purposes. All images and opinions are our own.