PAW Patrol – we’re on a roll! Good news PAW Patrollers, everyone’s favourite rescue pups are back in action in their brand new DVD – PAW Patrol Game On! which is released on 22nd May.

My son adores PAW Patrol and he was incredibly excited to get his paws on this DVD a couple of weeks before its UK release. In these seven exciting, sports-themed episodes, the PAW Patrol team take part in some daring rescues and amazing adventures. 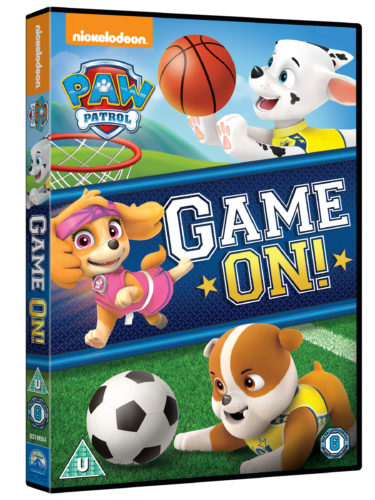 Pups Save a Basketball Game – Mayor Goodway needs a basketball team, so she calls Ryder and the PAW Patrol for help. The pups team up to become the “Adventure Bay All-Stars” and they’ll need everyone, including an uncertain Marshall, to pitch in and help win the game for Adventure Bay.

Pup-Fu! –The PAW Patrol and the mischievous kittens from Mayor Humdinger’s Kit-tastrophe Crew are both competing for their martial arts belts when they come across an ancient scroll that holds a wealth of secrets. Mayor Humdinger steals the scroll and the PAW Patrol is called upon to find and return it back to Sensei Yumi.

Pups Save a Snowboard Competition – Jake and Everest are excited for the big Snowboard Competition, until they look outside and see the course is completely buried under a blanket of snow. The rescue pups help to clear the course and rescue the Kit-tastrophe crew kittens who have fallen off a cliff. Everest uses her grappling hook to lower Ryder down the edge of the cliff and her snowboard jet pulls them back up to safety.

Pups Save the Soccer Game – When devious Mayor Humdinger challenges the Adventure Bay team to a soccer match, Ryder and the PAW Patrol are called in to play. The PAW Patrol players start strong but a series of mysterious mishaps jeopardise their team’s victory. The pups must work as a team to overcome some dirty tricks by Mayor Humdinger and win the match!

Pups Great Race – It’s Adventure Bay Race Day and the Pups are about to race each other all across the town to see who is the fastest pup. One other competitor unexpectedly shows up though, Alex in his super trike!

Pups Save a Tightrope Walker – Francois Turbot is bravely walking a tightrope between the top of the Bridge and the Lookout Tower, but storm clouds and seagulls threaten to ruin his act! It’s time to call the PAW Patrol to help get him safely to the other side.

My six year old son has been a massive (seriously massive) PAW Patrol fan for around three years now and his love to Ryder and the PAW Patrol team shows no sign of waning. I fully expected him to love this DVD and I was not mistaken. He’s watched the DVD several times in its entirety and then dipped in and out. The PAW Patrol Game On! DVD is an absolute must for any mini PAW Patrol fan!

Pre-order your copy today on Amazon

PAW Patrol: Game On! is available on 22nd May on DVD!