Over the weekend I made a big pot of my Spinach & Pea Soup with Ricotta Dumplings. It’s so quick and easy to make, and it’s absolutely packed with good stuff. The ricotta dumplings are optional but they help make a simple lunch a little heartier.

For me, Autumn is the season for soup. I love making a big bubbling pot of soup as a weekend lunch, and something that’ll last me through the week too. I’ve been feeling very run down recently and both me and my son are anemic. On top of the iron supplements he has been prescribed, I’ve been feeding him up with iron rich foods, spinach being top of the list. I’ve been finely shredding it and stirring it through all kinds of things, from curries to pasta sauces. Being secretive about eating spinach isn’t always a good thing, especially when it makes something so wonderfully vibrant as this. 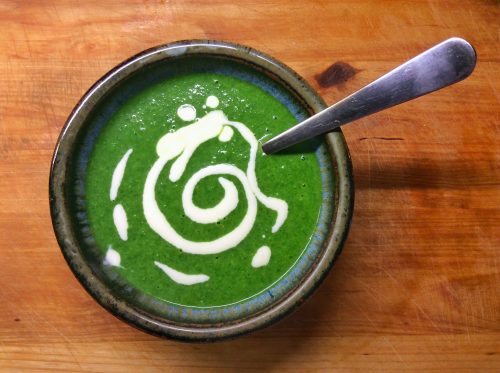 I’m not sure this healthy recipe could get much easier. Often I don’t bother with the dumplings and just make a huge pot of soup. It’s pretty frugal too which makes it an all round winner.

How to make the Spinach and Pea Soup –

Drizzle the oil in the bottom of a large pan. Throw in your diced onions and cook slowly until they’re tender. Add your diced potatoes and crushed garlic and stir for a minute. Pour in your hot stock, then leave to simmer for ten minutes or so until your potato pieces are tender.

Once your potato is cooked, add your spinach (it may look like a huge amount but it will wilt down to nothing) and put the lid on the pan for a few minutes, stirring occasionally to help the wilting process. Once wilted, throw in your frozen peas and simmer for a few minutes. Add some salt and pepper and about half a teaspoon of dried mixed herbs. You could use fresh herbs such as mint or coriander if you’d like, or even pesto, but dried herbs are fine.

Take the soup off the hob and leave to cool a little. Using a stick blender, blend the soup until it’s smooth with no lumps or leafy bits. Taste it and add more salt and pepper if you think it needs it. At this stage I also like to add a couple of tablespoons of single cream to make it taste a little more luxurious. 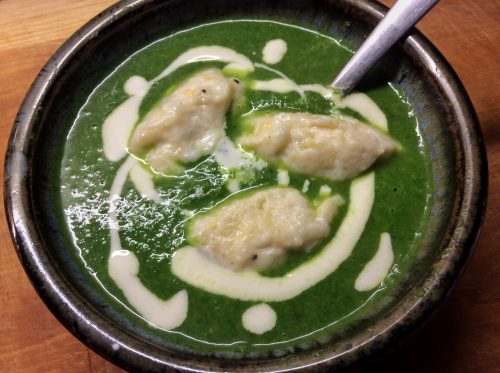 How to make the Ricotta Dumplings –

Drain your ricotta and pat it dry with some kitchen towel. Tip it into a mixing bowl with the Parmesan, salt and pepper and egg. Mix together. Carefully stir in the flour.

Put a large pan of water to simmer on the hob. Using two spoons, form the ricotta dough into small quinnells. If you don’t want to make quinnells, you can gently pat the dough into small ball shapes no bigger than a teaspoon scoop. Don’t be tempted to make them too big, they won’t cook through properly if you do.

In small batches put the dumplings into the simmering water to cook. Do not crowd the pan. The dumplings should sink to the bottom and then rise. I turn them over in the water and cook for another minute once they have risen to the top of the water. Remove them with a slotted spoon and drain.

To serve, float three dumplings on top of your spinach and pea soup. I added a drizzle of single cream, but some finely grated Parmesan would work well on top of the soup and dumplings too.

Enjoy with some fresh crusty bread and feel virtuous at how much healthy veg you’re eating. 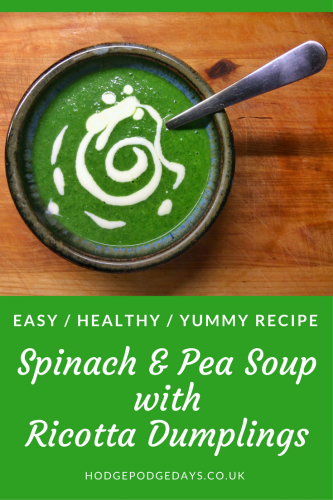 Check out my recipe for Norwegian Inspired Cauliflower Cheese Soup.