Summer is the season of horticultural and agricultural shows. Up and down the country, towns, villages and counties have fairs, fates and big shows and often there’s a competition where crafters, growers and bakers enter their produce to be judged against the best.

We were on holiday in the North Devon village of Welcombe during the preparations for their 60th Welcombe Horticultural Show. We have friends and family in the village, and they suggested I enter some of my baking. So that’s what I did. I entered two classes in the cookery section – Victoria Sponge and Homemade biscuits.

A Victoria Sponge should be a fairly straight forward thing to bake. It’s considered my many to be entry-level baking; but with a Victoria Sponge there is nowhere to hide. It’s so simple but quite easy to get a little bit wrong. Before I became more interested in baking I used to make very mediocre Victoria Sponge cakes, but in recent years I’ve perfected my recipe and technique and now my Victoria Sponge is as good as any. 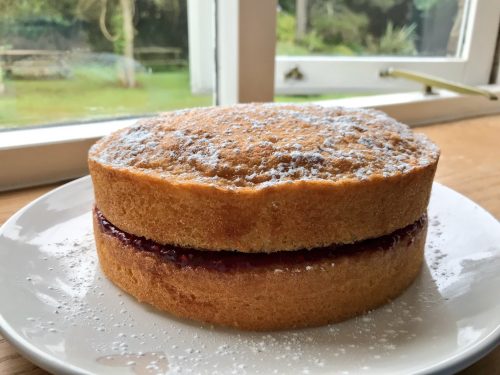 We were staying in a converted barn which had a very well equipped kitchen, so I only needed to buy some new cake tins and some weighing scales, plus the ingredients I needed. I made everything the night before the competition and made sure I read the WI rules for the perfect Victoria Sponge which you can find below.

Guidelines for making the Victoria Sponge sandwich for competition are set out in the NFWI Education Committee’s handbook On with the Show:

I followed these instructions almost to the letter, almost because I used icing sugar rather than caster sugar sprinkled over the top. I’ll know better next time.

I had a bit of a disaster with my lemon shortbread biscuits, the mix wouldn’t firm up enough for me to roll out, so I baked it in a traditional round and sliced it into six wedges. I knew that presentation would mark me down, and I was right; but the judges did comment on the lovely flavour and texture. So I just need to figure out what went wrong for next time.

We dropped my entries off on the morning of the show and then had a nervous wait while the judges deliberated. I was delighted when the show opened that afternoon to find that my lemon shortbread had won 3rd prize in its class and my Victoria Sponge was joint 1st. 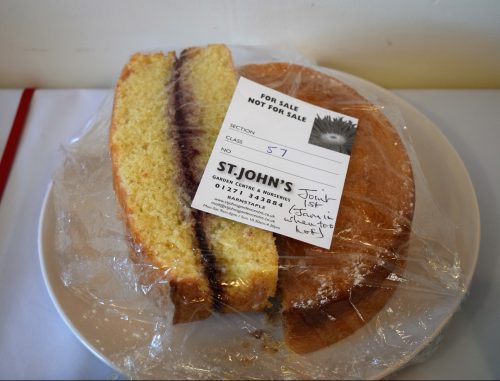 I genuinely did not think my baking stood a chance against the talented local bakers. The competition was very stiff and I was so pleased with myself for doing so well.

The recipe I used for my Victoria Sponge was based on my fail-safe sponge cake recipe which has done me proud over the years. It never fails, never.

Method:
Heat your fan oven to 190c. Grease two 20cm sandwich tins, I also lined the bottom of each tin with a circle of baking parchment. In a large bowl, beat your butter and sugar together until fluffy (I used a hand mixer). Add the eggs, milk and vanilla and combine, then add the flour and baking powder and mix together until you have a smooth batter.

Divide the mixture equally between the two tins. You can weigh them to make sure they’re fairly equal if you’d like. Bake in your pre-heated oven for around 20 mins until golden and they’re cooked. Remove from the tins and leave to cool on a cooling rack.

If you’re baking to WI standard and want to avoid making cooling rack marks, then turn your cakes out onto a cooling rack; but make sure there is a piece of baking parchment between the cake and the rack.

Leave your cakes to cool, preferably overnight before thickly spreading good quality raspberry jam between them and sandwiching them together. Dust with a little caster sugar and serve.

It’s really important to make sure your cakes are cool before you put your jam layer in. I thought mine were cool enough, but they weren’t and my jam seeped into the layers and I got marked down for that.

My Victoria Sponge was victorious! I’m planning to go back again next year and defend my title, enter a few more things into the show and do better with my lemon shortbread.

If you live somewhere where there is a village show, or some kind of Bake Off competition, please do consider entering. It’s really great fun. I entered thinking I didn’t have much hope of even placing, let alone winning anything. I was delighted to have done so well. Good luck, and happy baking! 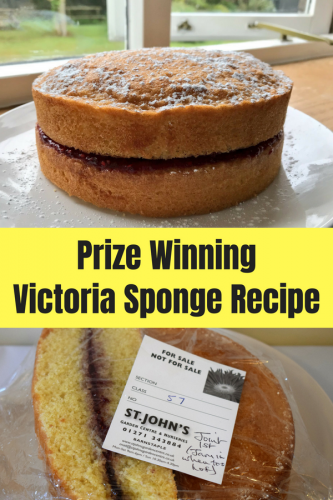 I’ve got this fancy newish camera which I’ve been trying to use and get used to. I had planned on taking it on holiday to Devon for a week to try and spend some time getting to know it a bit better, but I ended up with a fairly epic chest infection a couple of days before we went and I wasn’t really in the mood.

I decided instead to take my “old” camera, a Nikon Coolpix L820. It’s a bridge camera and whilst it really struggles indoors, outdoors it comes into its own.

Before we headed down the M6 towards the South West one of my friends challenged me to take 5 decent photos of Devon. I don’t think I’ve managed that, but I have chosen some pictures which will make me smile.

It wasn’t a particularly great holiday, we’d booked an especially skanky cottage and ended up having to leave after three days and go and stay elsewhere. It was a shame, after everything we’ve been through these past few months I just really needed a rest, a break from the norm and some time to reflect and recover. But maybe that’s something for another blog post. Back to the photos….

Day one of our holiday we got in the car and went for a drive to get our bearings. I’ve no idea where this place is, it’s somewhere in Exmoor, somewhere where we stopped for some air. There was purple heather everywhere, gorse in flower and the air was as clear as a bell. I love the colour and texture in this picture. 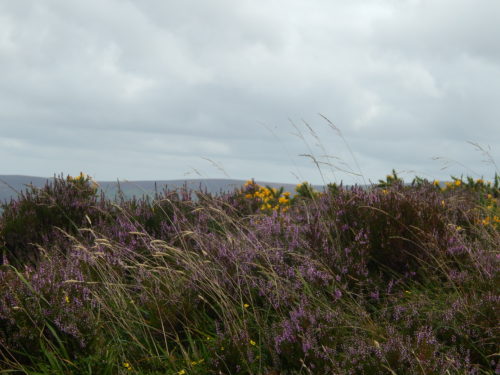 The first cottage we stayed in didn’t have much to recommend it, but it did have a huge buddleia outside the front door. It was teeming with butterflies and bees, so I snapped this little fella. Isn’t he lovely? 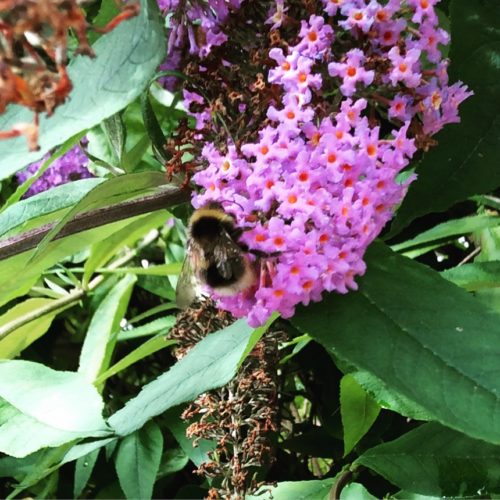 Day two, in an attempt to cheer ourselves up we headed to the familiar territory of Westward Ho! It was worth the drive of nearly an hour for the fresh air and the lift in our spirits. 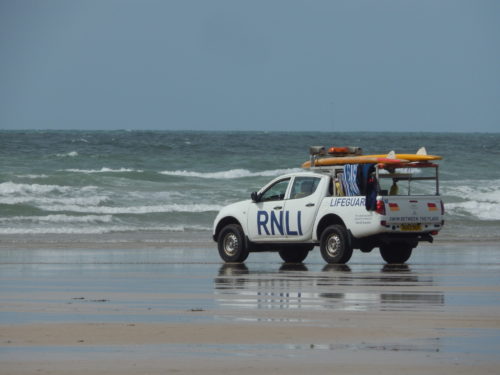 Although he will kill me for sharing this, I adore this photo of my boy running towards his Dad who had just been for a swim in the sea. Again this is Westward Ho! 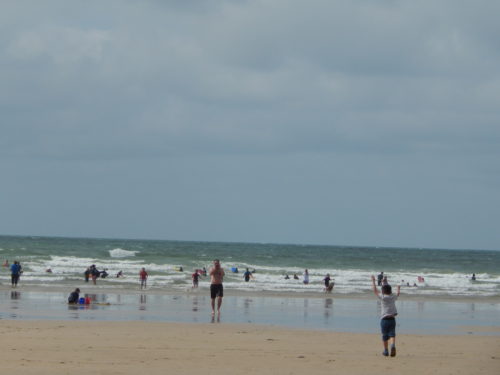 It’s not an especially lovely photo, but this is the view from the cottage we stay at in Welcombe in North Devon. Waking up to see the church, the sky and a tiny handkerchief of the sea always makes me happy, rain or shine. 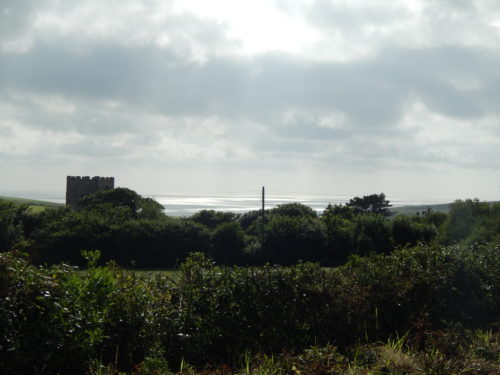 On our last night we drove to Bude and had dinner at Life’s a Beach, which by day is a beach cafe and by night a popular bistro. We had a delicious meal and then walked some of it off on the beach afterwards. Here’s the small boy at his cheeky best. 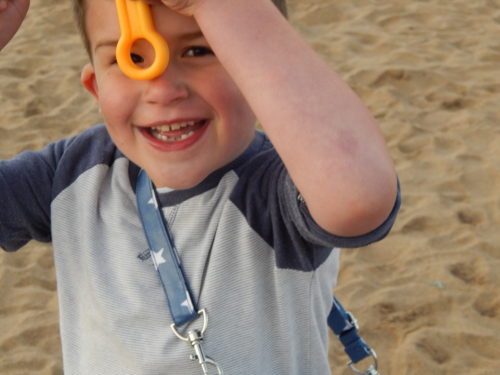 The last night again, this time the beach at Bude, a harbour of sorts. It’s not a great photo, but it is a photo of one of my happy places. 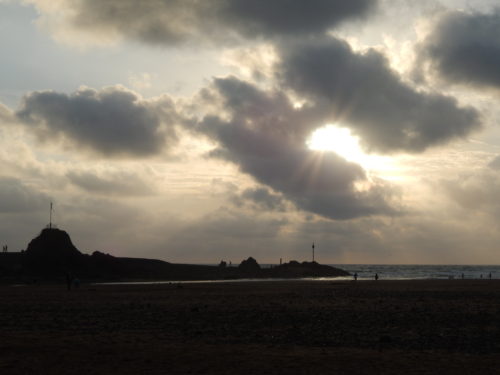 And lastly, on our way home we stopped at Westward Ho! (are you sensing a theme here?) and had fish and chips on the beach for tea. Whilst we waited for dad to come back I took this panorama and the boy played with his new sword and shield. The result is this rather moody shot of a knight which will probably always make me smile.

A mixed holiday for us, some lovely moments, some disappointment, but lots of lovely cuddles with the boys. Looking back I didn’t take any or many decent photos, it’s probably reflective of our mood at the time. We did have fun, we did stick brave smiley faces on for the boy and we did our best to make the best of our holiday. I think he had a good time and that’s all that matters right now.

A last minute break in what we think is one of the most beautiful places on earth. Smack bang on the North Devon and Cornwall border this is Welcombe Mouth, with gorse and heather covered cliffs, it’s own waterfall, jagged rocks and great surfing. What’s not to love?

It is cold though. So very cold. Brrrrr. 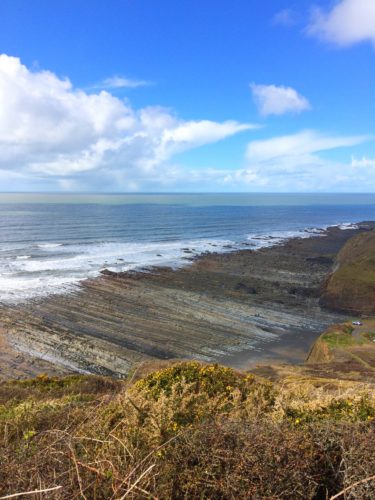