The small boy has recently been learning more about dinosaurs. We’ve been reading stories about them and watching Andy’s Dinosaur Adventures on CBeebies together. We’ve been talking about what they’d sound like, how they’d walk, fly or swim and what their skin would look and feel like. With  almost perfect timing we received the Paint and Play Dinosaurs set from Interplay to test. 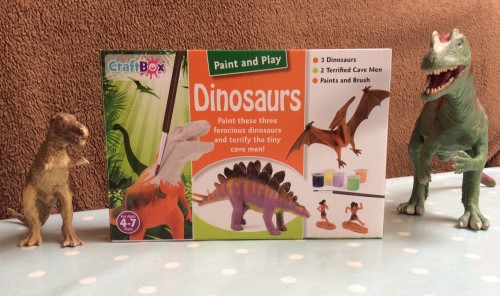 The Interplay Paint and Play Dinosaurs set contains three prehistoric dinosaurs to paint, two tiny terrified cavemen, a set of paints, a paintbrush and a dinosaur fact sheet to learn more about the dinosaurs you’re decorating. 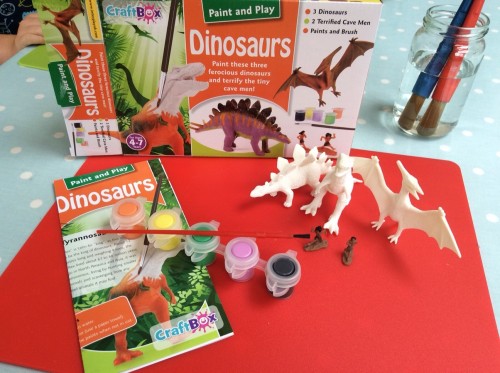 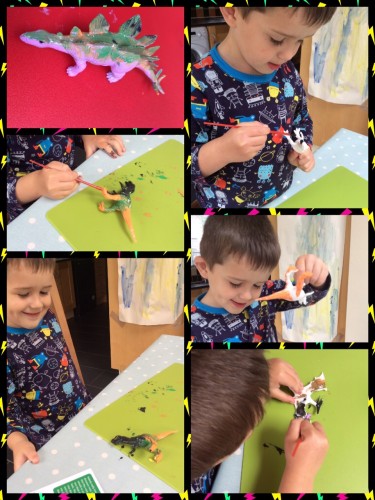 We had tremendous fun painting our dinosaurs and talking about the different colours they might be. There was plenty of paint to use and it was all washable (which was good news for his clothes and my tablecloth). There was only one fine paintbrush, so I needed to raid my supplies, so that’s worth noting if you’re going to paint your dinosaurs as a group activity.

Painting them kept us occupied for a good half hour or so, plus there was lots to talk about and the fact sheet helped us find out more about the fearsome beasts we were cheerfully painting purple and orange. We had to leave them to dry before we could play with them properly, so we read some of his dinosaur books while we waited. 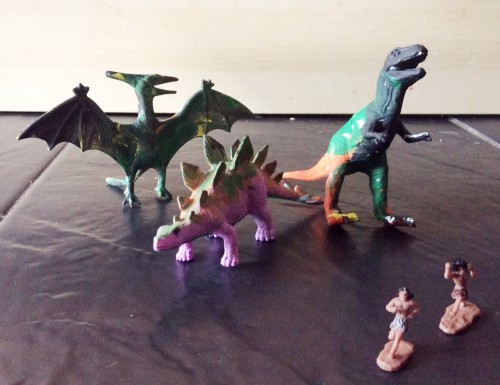 Ok, so our dino-depictions may not be 100% factually accurate, but they were 100% fun to do. It was a nice focussed activity which he enjoyed doing, but at the same time worked his pencil (paintbrush) grip, his hand-eye co-ordination and gave us the opportunity to have a discussion all about dinosaurs, where they came from and what happened to them.

The Paint and Play Dinosaurs set from Interplay is suitable for ages 4-7. The small boy is nearly five and I think this is spot on for him. There are quite a few different sets to choose from in the Interplay Craft Box line, so I’ll be choosing something else for him to paint for our next rainy afternoon together.

Note: We were sent the Interplay Paint and Play Dinosaurs set free of charge for review purposes. All images and opinions are our own.

10 thoughts on “Review: Paint and Play Dinosaurs from Interplay”