It has become something of a tradition that we have a little Halloween party each year. We schedule it during half term so it gives the kids a chance to get together and have fun, and us mums get to catch up with each other. I provide the house and some basic drinks and snacks, the other mums bring extra snacks, craft activities and games, one even taught a dance routine last year! In preparation for the party we’ve started doing some Halloween crafts at home and making some things to decorate the house with for the party.

We were sent a pack of four Halloween lanterns to make from Baker Ross. They have a really interesting selection of Halloween crafts to make and I particularly like the “day of the dead” themed crafts which might be more enjoyable for older children.

There were four different designs of spooky lanterns in the pack on different coloured card. The designs were punched out of the card and we needed to push out the design and glue the “stained glass” tissue paper on the inside of the lantern windows. This was really easy and good practice for little fingers doing a semi-fiddly job.

My top tip would be to fold the creases of the spooky lanterns where they have been scored before you start gluing and sticking, if you pre-fold them so they’re ready it makes things much easier later on. 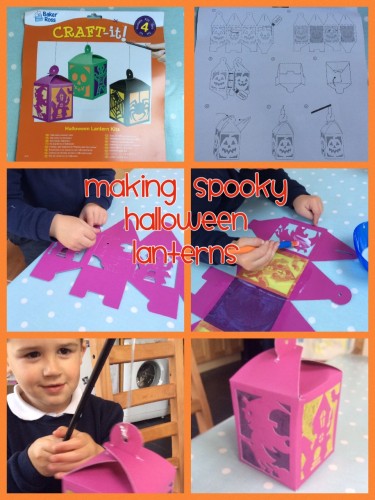 Once you’ve glued the tissue paper stained glass into place you should leave it to dry for a few hours. Then the instructions say to glue the flap on the lantern in place to create the box shape. We glued ours, but in the future I’d probably use double sided sticky tape – much easier, quicker and less sticky.

Once the glue is dry, following the instructions, fold the lantern together and affix the stick and glittery string. You can pop an LED tea-light in if you like, but I think it looks rather fab on its own. We’ll make the rest of the lanterns and hang them from the ceiling for our party!

The boy really enjoyed making these with me. The instructions were clear, but he did need a grown up to help guide him and to do some of the tricky folding. He loved the result though and proudly showed off his lantern to everyone who would look. This was a great Halloween craft activity, something different for us to do which we both enjoyed!