I was quite badly bullied at school and that kind of thing stays with you. Attitudes towards bullying seem to have changed in recent years, I think most schools have anti bullying policies and can take things a little more seriously than they did in my day. At my son’s school they’ve been doing a lot of activities around anti bullying week; so we’ve picked out six books about bullying to read this week (and every week, because this stuff is important)! 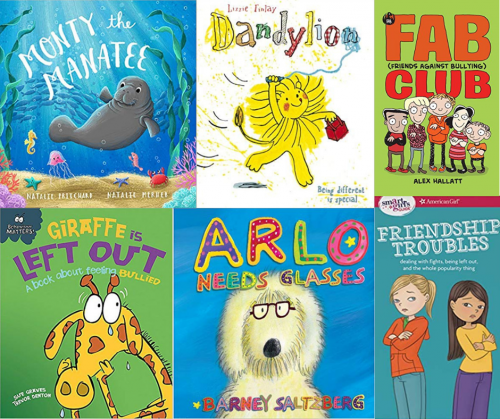 FAB (Friends Against Bullying) Club (FAB Club Book 1) by Alex Hallatt. This is an action-packed chapter book for 8-12 year kids who want to stand up to bullying. This is an inspiring children’s book about standing up to bullies and forming new friendships. FAB is full of humour, and has a gripping plot which teaches kids how to solve problems together.

Arlo Needs Glasses by Barney Saltzberg. One out of every five school children need glasses. This a really fun picture book for children, you can read an eye chart, look through a fold-out phoropter (that big machine optometrists use), and try on different pairs of glasses – movie star glasses, superhero glasses, mad scientist glasses and find the right pair of glasses for you. Once Arlo find some glasses which suit him, he’s back to enjoying all his favourite things again. This is a really positive book and ideal for children who are learning to love their own spectacles!

Giraffe Is Left Out – A book about feeling bullied by Sue Graves and Trevor Dunton. When Leopard arrives at Jungle School, Giraffe doesn’t want to include him and tries to exclude him from joining in. So when Leopard has a birthday party he doesn’t invite Giraffe, even though he has invited all his friends. Slowly Giraffe begins to understand how Leopard must have felt when he started school. Can the two of them learn to become friends after all?

Dandylion by Lizzie Finlay. Dandylion is one of my favourite children’s books ever! It’s all about being different and learning to accept difference in other people. When the ‘delightfully different, bright yellow and rather scruffy’ Dandylion joins Miss Gardener’s neat and tidy class, chaos and fun follow. But after one messy incident too many he’s told to go home – he just doesn’t fit in. It doesn’t take long, however, for everyone to realise that too much neatness and order isn’t always a good thing and everyone’s desperate for Dandylion to return!

A Smart Girl’s Guide: Friendship Troubles: Dealing with Fights, Being Left Out, and the Whole Popularity Thing (Smart Girl’s Guide To…) by Patti Kelley Criswell. This guide will help girls deal with the pitfalls of interpersonal relationships, from backstabbing and triangles, to other tough friendship problems. It features fun quizzes, practical tips, and stories from real girls who’ve been there – and are still friends. It’s just a shame there’s not a version for boys too!

Monty the Manatee by Natalie Pritchard. Monty the manatee is nervous about his first day at Sea School. He tries to make new friends but the other sea creatures think he’s a bit slow and strange. They’re really mean to him and call him names, but when his class is invaded by a dangerous predator can Monty save the day? Monty the Manatee is a simple book about kindness and friendships, suitable for pre-schoolers and children in KS1.

Do you have any favourite books on this subject? 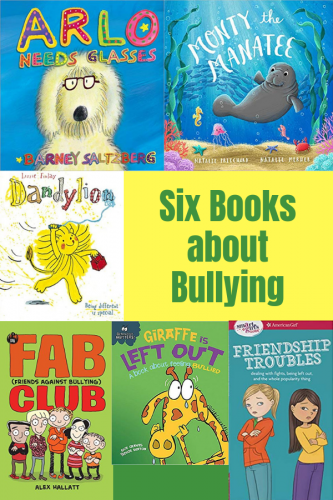 There are people in this world who will take advantage of your kindness and care. As an emotional empath there are certain kinds of people who pick up on that and take advantage of my sensitive, caring and giving nature.

I identify as an Emotional Empath, if you’ve not heard that term before, Karla Mclaren defines it here –

An ‘emotional empath’ is “someone who is aware that he or she reads emotions, nuance, subtexts, undercurrents, intentions, thoughts, social pace, interactions, relationship behaviours, body language, and gestural language to a greater degree than is deemed normal.”

Being an emotional empath means I am attuned to other people’s feelings and sensitivities on a level above and beyond the average. All my life people have said things like I’m a good listener, or I give great advice. People find it easy to open up to me and tell me their deepest darkest secrets. It can feel like a real honour to be the one person someone feels able to confide in.

The downside is that sometimes people can overburden me with their problems. Sometimes people can be a real drain on my emotional energy and it’s exhausting. It’s easy to burn out emotionally when someone leans on me too hard. I just have to take a step back, I can’t be the emotional crutch for the world.

Emotional empaths are highly attuned to the emotions of the people around them. Often instinctively knowing that there is more to a story than meets the eye.  We are emotionally drained by crowds, noise, smells and being talked at or bombarded with text messages, and we need time alone to recover ourselves.

I am very open with my feelings, I talk about them to everyone, I cry in public. I am highly sensitive, probably too sensitive and I pick up on so much around me. It can be exhausting.

I have learned to manage it to a degree. When I recognised that I was an emotional empath a few years ago, I read around it, spoke to a few people and I began to understand myself a bit better. I understood why I act and react the way I do and why I attract emotional vampires (people who instinctively see the empath in me, and take advantage of that) and how I can take steps to stop that happening.

I see my heightened empathy as a gift and a curse. I can’t imagine being any different. It’s a nice thing to be able to be there for people when they need someone to care and listen. But it can be overwhelming to be constantly aware of everyone else’s emotions swirling around me.

I used to think I was too sensitive for my own good, but in so many ways it’s good to be sensitive. Learning to listen to the intuitive voice inside me makes me a better person. It can be exhausting, but being an emotional empath is a powerful gift, and one I wouldn’t change. 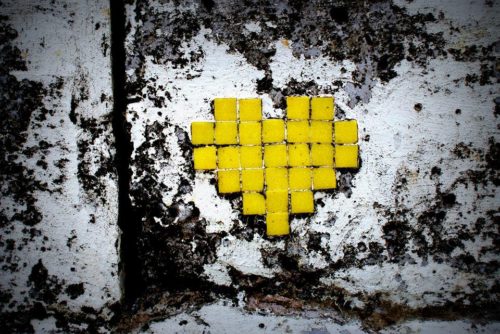