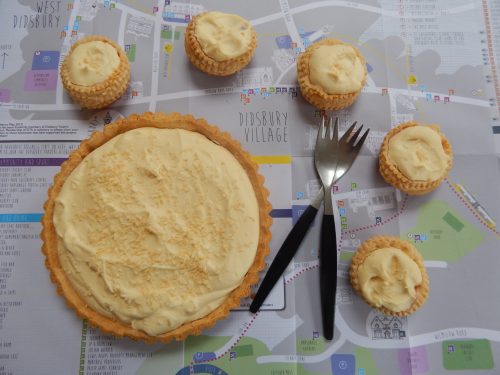 My Grandma was an accomplished pastry chef and school cook. When she died I inherited her cookbook collection. The jewel in the cookbook crown was a large hard-backed book filled with her handwritten recipes which she’d developed over the years. In this book in her best copperplate handwriting was her recipe for Manchester Tart. Over the years, the original tart was probably served to thousands of Mancunian school children.

This delicious tart was a favourite school dinner treat and is based on the similar but fairly ancient Manchester Pudding. 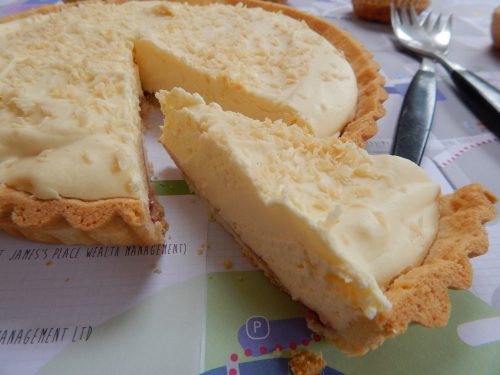 I’ve not so much reinvented it, but left the bananas out. Feel free to add them back in, or leave out the coconut if you prefer. It’s quite forgiving really, as long as you’ve got a layer of good jam and lots of crème pâtissière you can’t go wrong!

Grease an 8 inch tart tin and gently press the pastry into it and trim the pastry roughly, you can tidy it up once it has baked. Place some baking paper and baking beads on top of your pastry and bake in the oven for 15 minutes. Remove the baking paper and beads and put back into the oven to crisp up for 5 minutes, or until golden brown. Leave to cool.

To make the crème pâtissière, split your vanilla pods and scrape out some of the seeds, put the pods and seeds in a pan with 500mls of the double cream. Warm this gently, stirring frequently until it is near boiling point. Remove from the heat and take out the vanilla pods.

Meanwhile whisk your egg yolks, corn flour and caster sugar together in a large bowl. Then slowly (so you don’t scramble the mixture) add some of the heated cream to the bowl, keep adding gradually, whisking all the time until the mixture is thoroughly combined.

Pour the mixture back into the pan and heat gently, whisking all the time until it is near boiling and thick. Remove from the heat and leave to cool. There are a number of ways you can prevent your crème pâtissière from forming a skin; personally I like to go back to it every five minutes or so and give it a good whisk, this will also help it cool a little quicker. If you don’t want to do this, you can lay a piece of cling film directly on the top of the crème pâtissière. 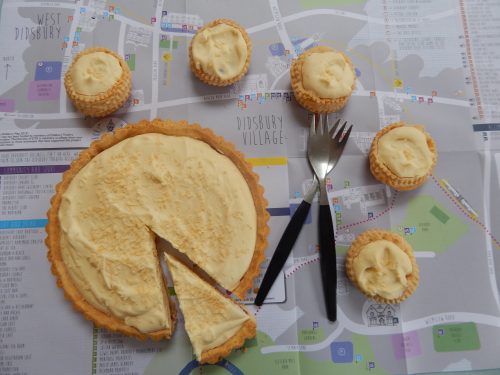 You will need to leave it for around an hour to cool properly.

In the meantime, whisk the remaining 300mls of double cream until it is in firm peaks. Once the crème pâtissière is cool you can carefully whisk the two together.

If you’re using the coconut, in a small pan warm the desiccated coconut up. Keep stirring until it is lightly toasted and fragrant.

To construct the tart, trim the edges of the pastry case with a sharp knife so they look neat. In your cooled pastry case generously spread your raspberry jam on the bottom. If you want to add thinly sliced banana to your tart, this is the time to do it.

Carefully fill the pastry case with the crème pâtissière mixture, smoothing it off and sprinkling the top with the toasted desiccated coconut. Put the tart in the fridge to cool overnight.

There are quite a lot of steps to making this tart, which is partly why I cheated and used ready-made pastry. Manchester Tart really is worth making at least once, and crème pâtissière is nothing to be scared of!

If you enjoyed this recipe, you might also like to try this Cornflake Tart or my lemon and elderflower gin meringue pie. 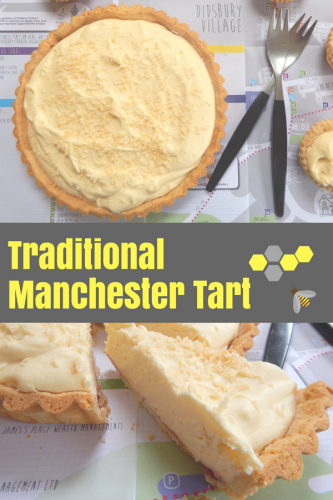 This Sunday may I present to you my Manchester Tart…. 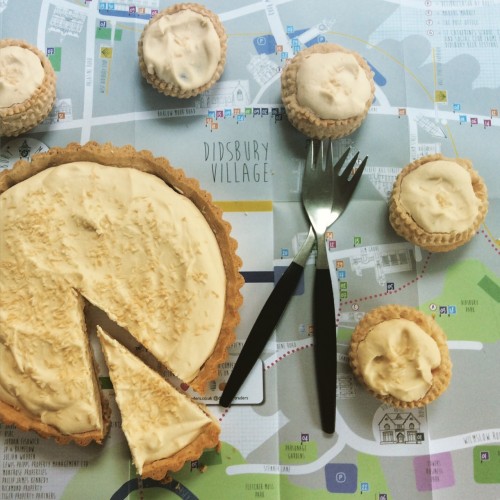 I’m doing a spot of recipe writing for something which I can tell you more about in April, and this is the happy and rather delicious result of one of those recipes.

My Grandma taught me how to cook, she was a school cook and a pastry chef, so this, the famous Manchester Tart was one of her favourite things to make. I followed her handwritten recipe in a rather battered handwritten book and this was the delicious outcome.

If you’ve never had Manchester Tart before, it is shortcrust pastry blind baked, smothered with a layer of raspberry jam, topped with creme patissiere and sprinkled with toasted dessicated coconut. Some recipes (some very wrong recipes IMHO) include a layer of sliced banana on top of the jam, and most use much more coconut than I did, but it’s all personal taste.

Regardless of whether you are pro or anti banana, this Manchester Tart was a fine tribute to my Grandma, and I like to think she’d be tucking into seconds right now if she were still with us.