For my son’s 7th birthday he wanted me to make him a Volcano Birthday Cake. I am by no means an expert cake decorator, so I knew whatever I made would need to be really simple to put together. The great thing about making a volcano cake if you’re not an expert cake decorator, is if it looks a bit rough and rustic when you’ve finished, it all adds to the rugged volcanic charm.

A few years of watching The Great British Bake Off has given me a few ideas, so I sketched the plan and set to work. You will need six round sponge cakes. I also used my favourite kind of shop bought frosting – Morrison’s Chocolate & Brazilian Orange Frosting. It’s the best shop bought frosting I’ve ever tried and it’s well worth searching out. If you can’t find it, use whatever chocolate frosting you can get your hands on. Here’s how I made my pre-historic Volcano Cake.

How to make a Volcano Birthday Cake

How to build your cake:

On a large clean tray or board put a dollop of Morrisons Chocolate & Brazilian Orange Frosting and start to build your volcano on top of this. The frosting will help to anchor the cake in place.

Sandwich your six layers of cake on top of each other with a layer of the Morrisons Chocolate & Brazilian Orange Frosting in between each cake. Take your skewers or straws and push then down from the top of your volcano structure down through the six layers to the bottom, this will make the cake more stable.

Carefully using a knife, carve your cake structure into a volcano shape. It doesn’t have to be perfect, remember if it’s rustic it all adds to the charm. Dust as many loose crumbs off your cake as you can and then start to plaster the whole cake in the Morrisons Chocolate & Brazilian Orange Frosting. Once it’s completely covered, leave it to harden a little for an hour or so. Taking the red and yellow icing from the Dr Oetker Regal Ice Ready to Roll Icing pack, cut each pack of icing in half. Set aside half of each pack and with the other halves, knead them together to make an orange coloured icing.

Here’s where you can get artistic. Roll pieces of the red, yellow and orange icing into rivulets of lava and press them into your volcano. Make sure there’s plenty of lava coming out of the top and running down the sides. You might want to pool some lava at the bottom of the volcano. Taking your dinosaurs and a little of the chocolate orange frosting (to stick the dinosaurs in place) add some dinos to the scene. Again be artistic; get them caught in the lava, running away from it, have them in little family groups, whatever you want.

Take your cupcakes and top with some frosting; wedge a letter on the top of each one and using the frosting on the bottom of the cupcakes, stick them in place to spell out the name. Again you can have dinosaurs around the cakes, or looking like they’re eating them maybe. To finish your cake, put the fountain sparkler candle in the top (so when you light it, it should sparkle and flame like a volcano.

My son was absolutely delighted with his volcano birthday cake, and his friends were pretty impressed too. It’s surprisingly simple to put together and it doesn’t have be perfect in order for it to be impressive. I dread to think what he’s going to ask for next year! If a volcano cake doesn’t cut it, what about this super-simple train birthday cake?

Children’s birthday parties can be fairly hard work, with lots to remember, from party food, party bags, games, music, costumes and cake. I’m all for making life easy (and on a budget), so this year instead of buying an expensive cake we opted to make our own. The small boy wanted a train birthday cake to go with his train birthday party and who am I to argue? 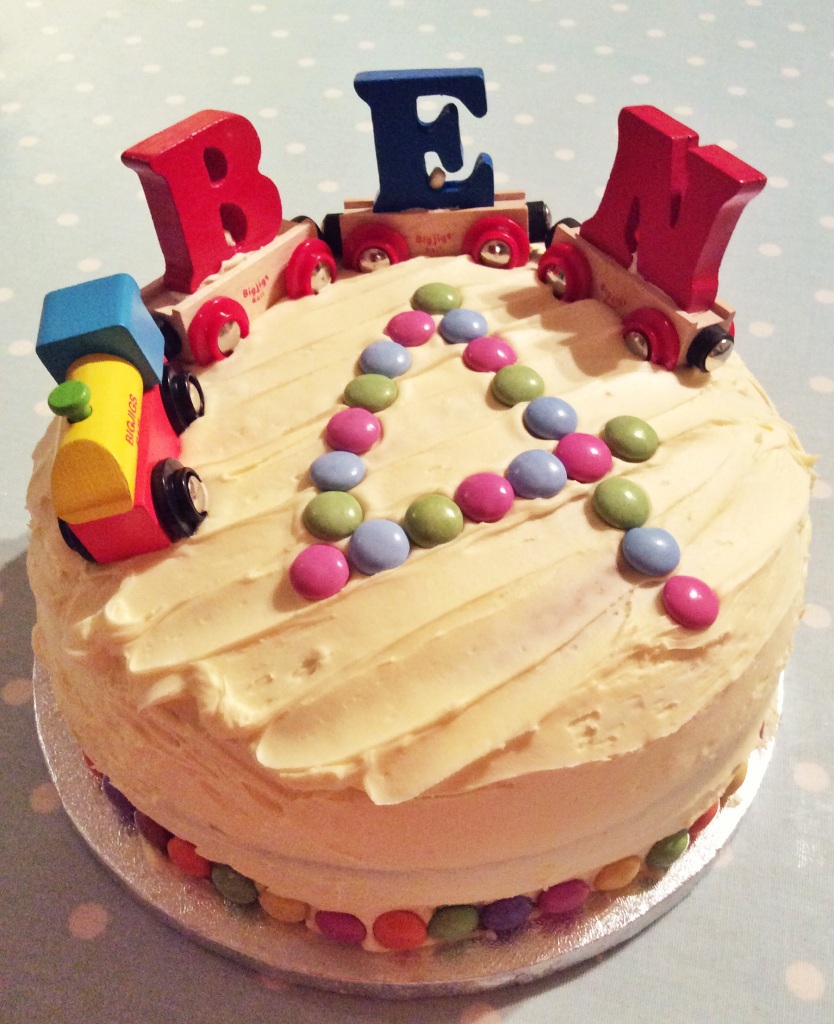 To make this easy train birthday cake you will need:
Three rounds of sponge cake (as described below)
Half a jar of raspberry jam (approx), or strawberry if you prefer
Two tubs of Betty Crocker Vanilla Buttercream icing
Three tubes of smarties
Bigjigs trains (see below)
One cake board (or big enough plate)

Hubs is the baker of the household, so I asked him to make three layers of sponge cake. Use your favourite and foolproof sponge cake recipe (his used 8 eggs to give you an idea of the amount of sponge we made) you want to make three round sponge cakes baked in a 25cm tin. Once baked they need to be around an inch tall.

With me so far? Good. Now you’ve got all your layers stacked carefully, spread the remaining buttercream over the top and sides of the cake. Don’t worry about it being prefect, if you aim for the rustic look it’ll be fine. I created a wavy effect with a palette knife and the sides were rough but fully covered. If you want you can make the buttercream smooth.

Bigjigs make a sort of pick and mix name train set, I bought mine from my local toy shop Giddy Goat Toys. I bought the carriage and the letters of his name for £2.25 each, which cost me just £9 in total. This was much cheaper than buying a proper train and carriages and much more personal.

I gave them a little wash, though they’d been in a sealed box, then using a little blob of the buttercream “glued” the removable letters onto the carriages and pressed the train into the thick buttercream in the top of the cake.

Tipping the smarties into a bowl I then wrote his age in smarties on the top of the cake, then I used the remaining smarties to edge around the bottom of the cake. I was pretty pleased with my efforts.

If you do this the night before the party and leave it out uncovered overnight, the buttercream should firm up slightly and make it easier to transport. On the morning of the party I wrapped it loosely in foil and it sat in my knee in the car on the way to the party. On arrival we unwrapped it and there were no buttercream smears on the foil and it still looked good. Phew.

The cake tasted really good, but hubs does make beautiful cakes. We had lots of lovely compliments about it. It sliced into approx 24 slices, which was more than enough for a kids party.

Our lovely and quite huge train birthday cake was a really big hit, a few people thought we’d bought it (ha, always a compliment) and the small boy was really, really pleased with it and proudly showed it off to his friends. It’s a really easy way to make a simple sponge birthday cake a little bit special. 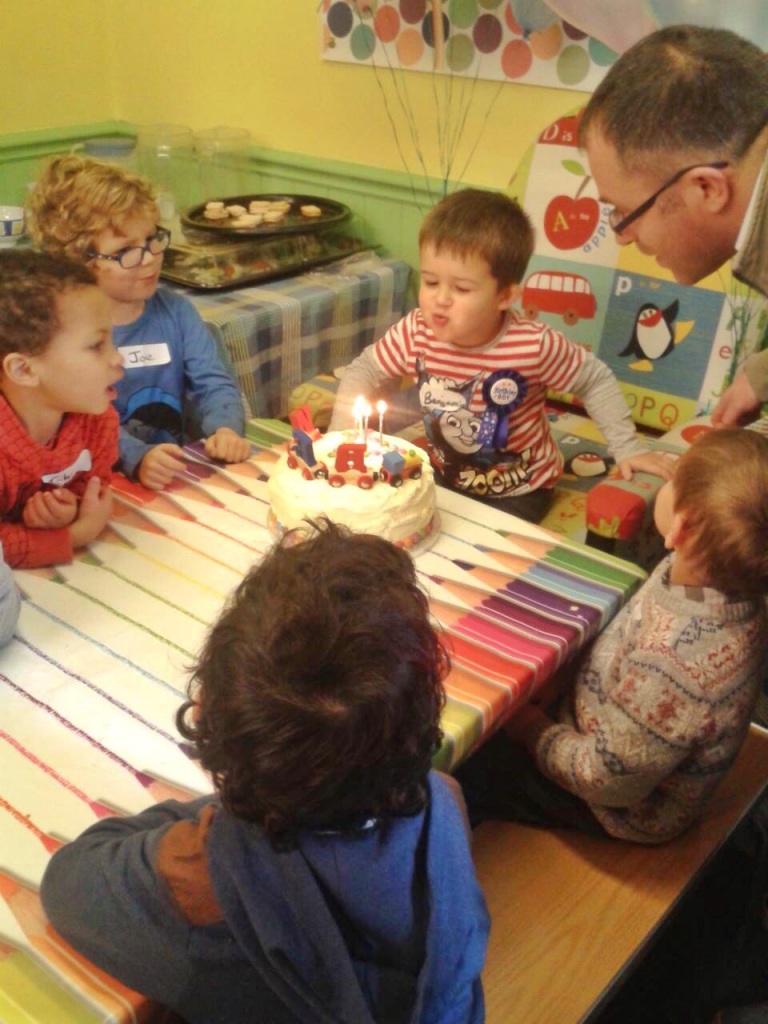 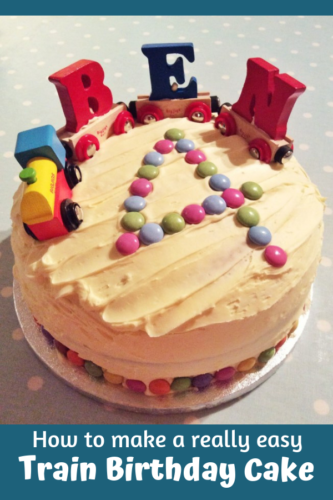