A few weeks ago I was mooching around one of my local charity shops when I spotted a silicone baking mold for a pound. They can be quite expensive, so I snapped it up and took it home. I think it was originally designed for small cupcakes or muffins, but this had homemade chocolate jazzies written all over it.

As a working from home mum I am often called upon to help entertain a child or two for the odd day during the school holidays. I don’t mind this as for me it’s probably easier to entertain two seven years olds, than one seven year old who is just so “boorrEDDD” of my company. I like to have a few crafts, activities and bakes up my sleeve to entertain any young visitors we may have; so I thoroughly cleaned my silicone mold and tucked it away for a rainy day. 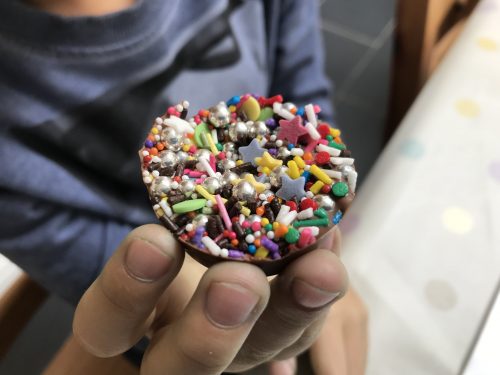 As a keen baker I always have a good variety of sprinkles in my cupboard. For some reason kids love sprinking almost as much as eating the sprinkles. I had quite a few little jars which probably needed using up. Making homemade chocolate jazzies is a really good way of using them up. You could give each child a different kind of sprinkle so they know which jazzies are theirs, or they can mix and match.

I made some sparkly chocolate cups for Mother’s Day back in the spring, they are very similar to those, but slightly smaller and with billions more sprinkles.

You will need:
A saucepan, a glass bowl which will sit in the pan, but so it doesn’t touch the bottom; a metal spoon, silicone baking molds.

How to make your chocolate jazzies:
Boil some water and pour the water into your pan so it’s about 3cm deep. Carefully place the glass bowl in the pan making sure the bottom of the bowl doesn’t touch the water. This is called a bain marie.

Break your chocolate up into small pieces and put it in the glass bowl. The water in the pan needs to be at a gentle simmer, not bubbling and boiling. Stir the chocolate until it is melted. 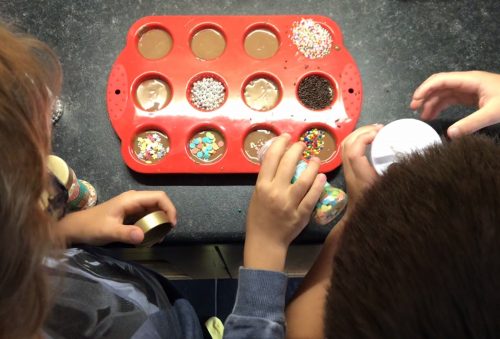 Once the chocolate is melted, with a spoon scoop out some melted chocolate into each of the molds. Try and put an equal amount in each. If you’re good at this there might be just enough left over for some spoon licking afterwards. Gently shake the silicone tray so the chocolate settles.

Once you’ve used all of your chocolate, take your chosen sprinkles and sprinkle as much or as little as you like over the top of each chocolate. Leave them to cool for at least two hours. If you need them to set a bit faster for impatient boys, pop them in the fridge. 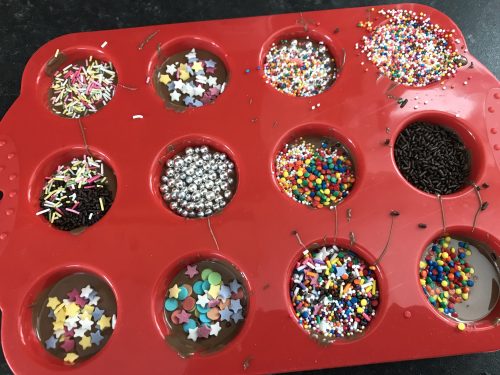 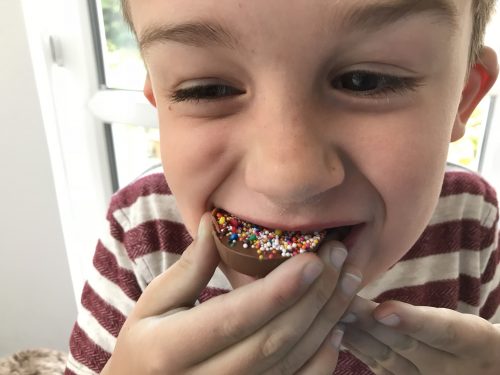 PS. If you’re wondering they they’ve got blue hands, we played with blue slime while the jazzies set and the slime coloured their hands for the day. They do have clean hands, I promise! 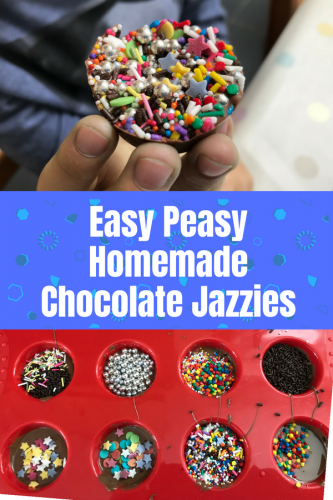 I love getting homemade cards and gifts from my son on Mother’s Day (and any other day he wants to make me something). As you can probably imagine, we’re quite big on baking at home and we bake for almost any occasion. I’m a firm believer in making life easy for myself. Whilst I’m happy to bake a fairly complex cake, there’s definitely space in my kitchen for incredibly simple recipes. I’ve made these Sparkly Chocolate Cups for Mother’s Day. They’re very, very easy to make and perfect for kids to make with a little adult supervision. Not only are they great for kids to make, if you lack confidence in the kitchen, these are so easy to make and look pretty impressive too.

You will need:
A saucepan, a glass bowl which will sit in the pan, but so it doesn’t touch the bottom, a metal spoon, some cupcake cases – I used silicone but paper ones are fine.

How to make your chocolate cups:
Boil some water and pour the water into your pan so it’s about 3cm deep. Carefully place the glass bowl in the pan making sure the bottom of the bowl doesn’t touch the water. This is called a bain marie.

Break your chocolate up into small pieces and put it in the glass bowl, the water in the pan needs to be at a gentle simmer, not bubbling and boiling. Stir the chocolate until it is melted.

Once you’ve used all of your chocolate, take your chosen sprinkles and sprinkle as much or as little as you like over the top of each chocolate. Leave them to cool for at least two hours. Once they’re cool you can either take the chocolates out of their cases and put them in a nice gift box or cellophane bag, or you could just present them as they are in their pretty cupcake cases.

They’re so easy to make and they look impressive, whoever you give these to will be as pleased as punch! 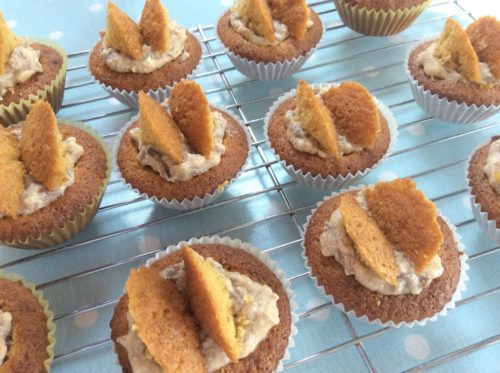 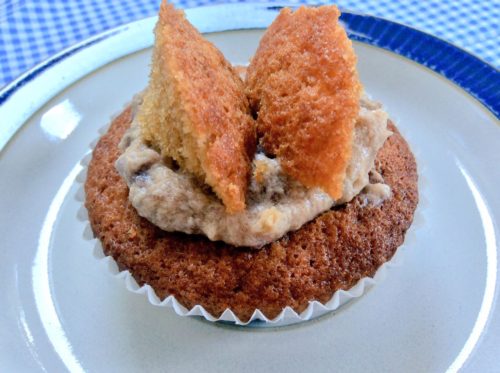 Since joining “the motherhood” I’ve had to get acquainted with my mixing bowl. I’ve never been a great baker of cakes, but seemingly the minute you become a mother, someone thrusts a whisk into your hands and asks you to bake two dozen fairy-cakes for some occasion or other.

My go-to cake has been a Victoria Sponge and my Vicky-Sponge is generally pretty well received, but I have failed in my attempts to make a good chocolate version, until now that is. There was always something missing, a lack of depth of rich chocolateyness and I couldn’t figure out why. I was sent a jar of Rayner’s Classic Malt Extract to try, my first port of call was to tentatively add it to a chocolate sponge cake, and by Jove I’d cracked it! 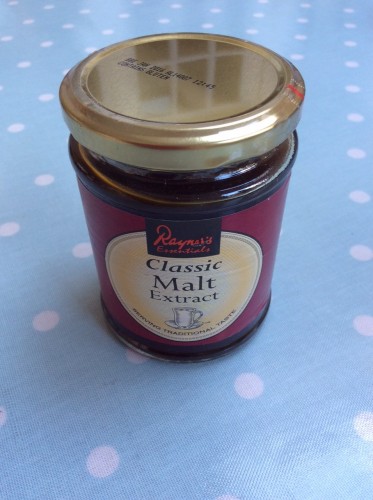 My easy chocolate malt cake recipe is by definition easy, quick to throw together in a cake emergency and tasty enough to offer the Vicar for tea. It probably won’t win any prizes for innovation or decoration, but it’s a delicious stand alone cake, or it works well with a dollop of ice cream and some fruit.

Instructions
Beat the butter and sugar together until fluffy. Stir in the eggs, baking powder, cocoa powder and malt extract, mix until well combined. Gently fold in the self raising flour, add a small splash of milk if the mixture is too stiff.

Pour the cake batter into a lined loaf tin.

Bake in a pre-heated oven at 190 for 30 minutes, check if it is cooked through and if it is remove from the oven and leave to cool. 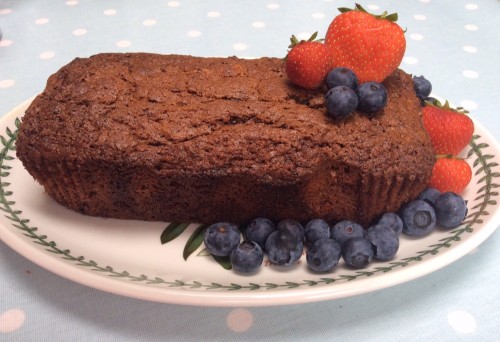 Note: I was sent a jar of Rayner’s Classic Malt Extract free of charge to use in a recipe. All images and opinions are our own.