Cranachan is a traditional Scottish pudding, usually made with whipped cream, whisky, honey and fresh raspberries, with toasted oatmeal soaked overnight in a little bit of whisky. Whilst my Cranachan Shortbread recipe isn’t faithful to the original, it is considerably inspired by this Caledonian classic.

This Cranachan Shortbread recipe is a beautifully short and crumbly whisky shortbread, dipped in chocolate and sprinkled with dried, crushed raspberries. It’s a biscuit and a half and a real Scottish inspired treat.

Dried raspberries are available, but hard to find. Unsuccessful, I ended up drying my own in a very low oven for many, many hours. I then crushed them in a pestle and mortar. I was pleasantly surprised with how they turned out, they didn’t smell especially powerful, but they certainly packed a flavour punch. They’d be great sprinkled on all kinds of cakes and desserts. In a mixing bowl, thoroughly beat the butter and sugar together. Once fluffy, add the whisky and little by little add the plain flour. Mix with a wooden spoon as best you can. Try not to overwork it too much or the dough will go gluey.

I find the following method tidier and it stops you manhandling the dough too much. Once the shortbread dough is almost mixed, tip it out onto a large sheet of greaseproof paper; bring the dough together with your hands and then fold the paper in half with the mixture sandwiched in between.

With a rolling-pin, roll it out so it’s about 5mm thick and cut into rounds. I used a glass for this and carefully lifted each shortbread biscuit onto the baking tray. You should get around 18 shortbread biscuits out of the dough. Sprinkle a pinch of sugar over each round.

Bake in the pre-heated oven for 12-15 minutes. Keep an eye on the shortbread, they still need to be pale and not brown. Once they’re baked, remove from the oven and leave to cool on a rack.

Whilst the shortbread biscuits are cooling, melt the chocolate over a bain marie. Once melted, dip each shortbread into the chocolate and half coat it, put your biscuit back on the greaseproof paper and sprinkle the dried raspberries. Try to resist eating your shortbread until the chocolate has set.

Enjoy with a cup of tea or a wee dram if you’re so inclined! Sláinte!

If you’ve enjoyed this recipe, you might also like this Haggis, potato cake & poached egg stack or these delicious haggis pasties. 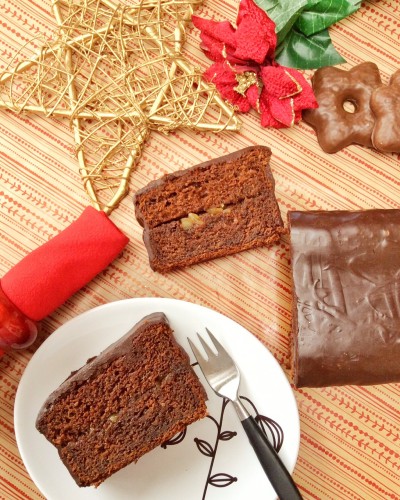 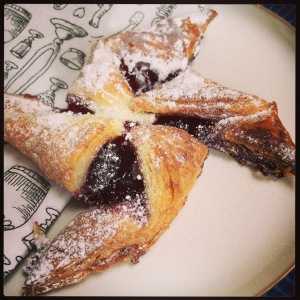 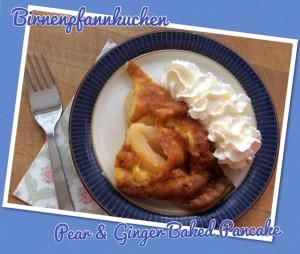 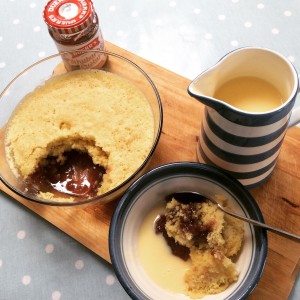 If you’re a novice baker, biscuits and shortbread are a great place. Biscuits are fairly easy. They don’t need to be light and fluffy and they don’t need to rise. The one thing I can successfully bake,which usually gets stacks of compliments is shortbread. I usually bake plain or lavender shortbread but I’ve decided to mix things up and bake a cinnamon and raisin shortbread instead.

I inherited the basic shortbread recipe from my Grandma who was a cook and a pastry chef. She used to make fantastic puddings. I’ve taken her shortbread recipe and added a few other ingredients. I’m really pleased with the results, they’re a buttery, short, crumbly shortbread with a lovely cinnamon and raisin twist! Rub the butter and sugar together with your fingers or using a food mixer. Then lightly rub in the flour and the cinnamon with a wooden spoon (I do this in stages to avoid a flour cloud in the kitchen). Add the raisins and mix through the dough.

I find the following method tidier and it stops you manhandling the dough too much. Once the cinnamon and raisin shortbread dough is almost together; tip it out onto a large sheet of greaseproof paper. Bring the dough together with your hands and then fold the paper in half with the mixture sandwiched in between.

With a rolling-pin, roll it out between the sheets of paper, so it’s about 5mm thick and cut into rounds. I used a glass for this and carefully lifted each cinnamon and raisin shortbread biscuit onto the baking tray. Sprinkle a pinch of sugar over each round.

I managed to get 18 large shortbread rounds out of the dough and I got another 18 mini round shortbreads too. Bake the mini rounds for just 10 minutes, they’re lovely with a cup of tea and their mini size makes them seem much fancier.

Bake the large shortbread rounds in the pre-heated oven for 12-15 minutes. Keep an eye on the shortbread, they don’t really want to brown. Once they’re baked, remove from the oven and leave to cool on a rack. Shortbread can be a tricky beast, you don’t want your shortbread to brown, it needs to be pale in not over-baked. It’s tricky to see these shortbreads brown as the cinnamon makes them darker to begin with. Different ovens cook differently and I’ve found different butters behave differently too. So it’s best to keep having a peek. You want it to still be pale, but cooked through. You don’t want to dry it out and over-bake either.

Try if you can (I failed) not to gobble one down while they’re still hotter than the surface of the sun. Once cool, enjoy with a streaming mug of tea. They can happily be stored in an airtight tin for a few days, if they last that long. These shortbreads were a massive hit, they were loved by all. I was cautious with the cinnamon as not everyone likes it. I think next time I’d put more cinnamon, but it depends how much of a fan of this spice you are. If you’re not sure how much you want to add, you can always taste the raw dough and add more if you think it needs it.

If you enjoyed this recipe, you might also like my recipe for Crumbly Cranachan Shortbread with Whisky.